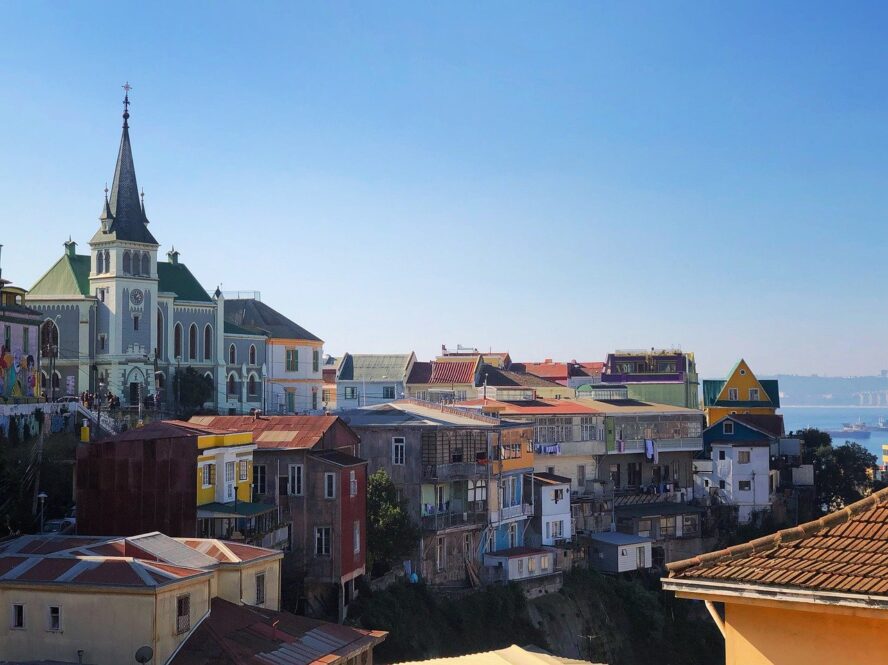 “You know how when you’re listening to music playing from another room? And you’re singing along because it’s a tune you really love? When a door closes or a train passes [and] you can’t hear the music anymore, but you sing along anyway… then, no matter how much time passes, when you hear the music again, you’re still in the exact time with it. That’s what it’s like.”

Gina set her basket down as she ended her day off. She unzipped her pink windbreaker and reached into her scrub pocket for the last, few, remaining pesos to make her way home. The steep trolley ride all but separated her from the last house on the hilltop. A long, spiral road lay before her, one that resembled the first strands of life.

The port city of Valparaíso, around midpoint on Chile’s coast, is within the country’s second most populated metropolis. Founded in 1536, on a cluster of hills overlooking the vast Pacific Ocean, Valpo—as it’s called by locals—is known for its labyrinthine cobblestoned alleys, colouful clifftop homes, and steep funiculars (ascensores). It’s a UNESCO World Heritage site, with an urban population of barely 300,000. (Photo by David Vives on Unsplash)

She sighed as the pre-war ascensor was closed yet again.

Pulled and lowered down the city’s steep hills on metal cables, there are 14 functional ascensores or ‘funicular elevators’ in Valparaíso. The unusual mode of public transport dates back to 1911 and numbered around 30 at the height of their use. After decades in disrepair, there is now a movement to revive them. (Image by Paula Soler-Moya is licensed under CC BY-NC-ND 2.0)

Gina still had a fresh spring in  her step from her last meeting and decided to take the more laborious route after getting off the first tram on Caleta Portales. Her feet began to trace the circuitous path around the hill to her amo, whom she left in a state of agitated torpor in the hands of her visiting daughter.

Nicknamed ‘Jewel of the Pacific’, Valparaiso was once one of the richest cities in South America. It was ‘de-gentrified’ in the mid-20th century after an economic slowdown saw many of its wealthier families move to busier areas. Its vibrant street art scene was born in the 1940s and grew in the 1970s in opposition to a military regime. (Photo by mauro mora on Unsplash)

Santiago, her first port of entry, was in the throes of the pandemic. The headlines at the lonely paper stand and in her Twitter feed showed infections nearing the 300,000 mark: the highest count among the distant cities of this almost forgotten and underpopulated nation. One that she felt was hers to weave herself into, with a few, shared strands from her own.

Gina thought to herself how—just over a hundred miles from the capital—she was spared from the crossfire of the pandemic’s reach. With Valparaíso harbouring just a tenth of the cases, she counted as her continued luck that her path led her away from the front lines and into the home of her patron, patient, and friend.

‘Valpo’ has been referred to as the world’s largest art gallery, with much of the city used as a canvas by both famous and lesser known artists. Walking tours are offered to some of the most popular sites. (Image by Boris Gonzalez from Pixabay)

Tonight would be special, Gina thought, as she walked up the last stone steps, painted into a mural to look like piano keys. Dangling from her strained arm was the bag of crustaceans, condiments, and spices from the Mercado El Cardonal. There where she met with her fellow Overseas Filipino Workers who gave her the contraband at the bottom of her knapsack: a few dark, unmarked bottles of THC oil in crumpled brown paper for her unpredictable ward, enough to last the month until they saw each other again.

Ten percent of The Philippines’ 114 million people work abroad. Called OFWs, only 800 are known to be in Chile, which is over 17,000 kms—or nearly 2 days’ flight—from their native country. Though half a world apart, both nations were once colonies of Spain. (Photo by: Mildred Caranto/The Santiago Times)

Gina sang wistfully through her N95 mask, then stopped. She looked around and removed it as the climb got steeper and her breaths grew more laboured. She stopped at the landing separating the last flight before Collado Street, and sighed at the vista: the graffitied walls and uneven roads filled with garbage faded below her.

Suddenly, the air warmed and lay stale. She resisted the desire to take another selfie and just paused to catch her breath—letting the moment, the new feelings of the day, take hold.

Looking below, Gina thought of how, in some ways, this port city resembled her southern hometown of Zamboanga. Its colonial buildings tracing the sea giving way to ramshackle structures past the sweep of the seafront. Up here, with the erstwhile crisp air and the promontories that stretched higher than any building back home, she could forget her cares. At this spot, e verything below—from the sparse crowds to the noise of the remaining buses and cars—shrank in to blurred, faint miniatures and echoes.

She knew, from experience both at home and her two years here, that tonight would be different. With the motionless air and the gathering clouds far on the horizon, she sensed a storm approaching. This would be the first of the temporales, she thought. Or worse, marejadas that battered the coast months before the summer set in and with it, the Christmas holidays. That in itself made the season more familiar. Something Gina could wait for since the pandemic made her return home all but impossible. Chile’s inverse, warmer weather by December, the Spanish greetings she could also bandy about with her Chavacano dialect in hand, helped anesthetize the longing for home. Even with the pandemic’s threat of fewer, if virtual, Masses and Noche Buena gatherings of a more terse and lukewarm people, she felt that it would be just enough to look forward to.

Gina gathered herself as she rushed up the final steps to the house. The last cross-street was now bathed in a faint golden hour, and she grew excited with her plan to treat her employer to a fancy, home recipe. She reached the faded red door at the end of the cul-de-sac and reached for the brass knocker shaped like a woman’s hand.

“I’m sorry, I had to walk the rest of the way,” Gina replied, trying to speak in cobbled, muffled Spanish through her mask to appease her, thinking she got home on time, if barely.

Gabriela trotted out her best English and it sounded even more offensive. “Can’t you see I’ll be late for my dinner in Santiago? You fucking Filipinos are all the same. And I bet you even took off that mask in the city. You’re going to get us all sick and killed!”

“¡No tengo tiempo para tus explicaciones! I expect you to make up for your laziness and clean the whole day tomorrow—make sure I don’t find a speck of dust in the upstairs bedroom when I come back next month or get ready for a pay cut!” Gabriela’s projected her high-pitched voice into the street. She swung her satchel around her shoulders and ran to the car across the street without looking back.

Gina turned around and shook her head, cursing under her breath. She started to worry about her own child growing up to be like that without her when she heard the sonorous voice from across the hall.

“Never mind her. Am glad she’s left us. Welcome back, mi otra hija!”

Gina moved through the hallway, walking ever so slowly, never failing to gaze at the provenance along the stucco walls. Here were monochrome photos from a bygone era: her patron under the spotlight showered with garlands at the Teatro Municipal, tours of the North American music halls and in the arms of gringos, a few framed images of smoke-filled supper clubs somewhere in Europe, toasts at banquets during the brief halcyon days with Allende, and somewhere in the centre of the curation, before the cavernous sala, that photo with Neruda, whom she proudly called “mi Capitán.”

Did you know famous Chilean poet and diplomat Pablo Neruda was born Neftalí Ricardo Eliécer Reyes Basoalto? Neruda was a pen name he later legally adopted. He first used the pseudonym to avoid his father’s disapproval of his writing.

The voice with the garbled accent at the end of hallway was Señora Carmen, the grand old dame of the house. She sat in her generous oak armchair, waving her brass bell as if to usher in a better, grander mood, as she liked to do on days like these.

“There’s a storm coming po,” Gina liked to mix her native pleasantries with her responses, trusting her host to know what she truly meant in whatever tongue she spoke. Señora Carmen indeed fancied herself as a polyglot, a self-proclaimed world traveller at the height of her career.

“I know, pobrecita, and am glad you came just in time. It’s coming, this storm: I can smell it in the air.” Señora Carmen smiled.

One of the benefits of not having Covid, Gina chuckled to herself as she walked over to the kitchen and set down the ingredients for tonight’s meal. She was so pleased to have sourced all of these from her suki at the markets that plied the best of the Continent: chilies and turmeric from Mexico, curry powder from the Caribbean, coconut milk from Suriname, and today’s fresh catch from the Chilean coast.

“M’hija, are you ready for your Spanish lessons after dinner to vanquish your pidgin dialect? Afterward, you can copy my photographs to that Instagram like you do your whole life.” This was their weekly routine and barter, a way to pass the time and let the pictures prompt them to reveal the stories of their lives, a palacio de memoria, Señora Carmen liked to tease.

“Not tonight, Tia Mameng,” Gina was feeling an extra sense of melancholy as she brought out the candles for the dinner table, even as she teased Señora Carmen with her local endearment, one she would only use when Gabriela or other guests were not around. “I thought I could share something new in my life, we need more time for this—even once the rains come, and we could continue even if the power goes out.”

“Valparaíso is secret, winding, backyard… The stairs start from below and above and twist climbing. They are thin as a hair, give a slight rest, turn vertical. They get dizzy. They rush. They lengthen backward. They never end… ” Pablo Neruda