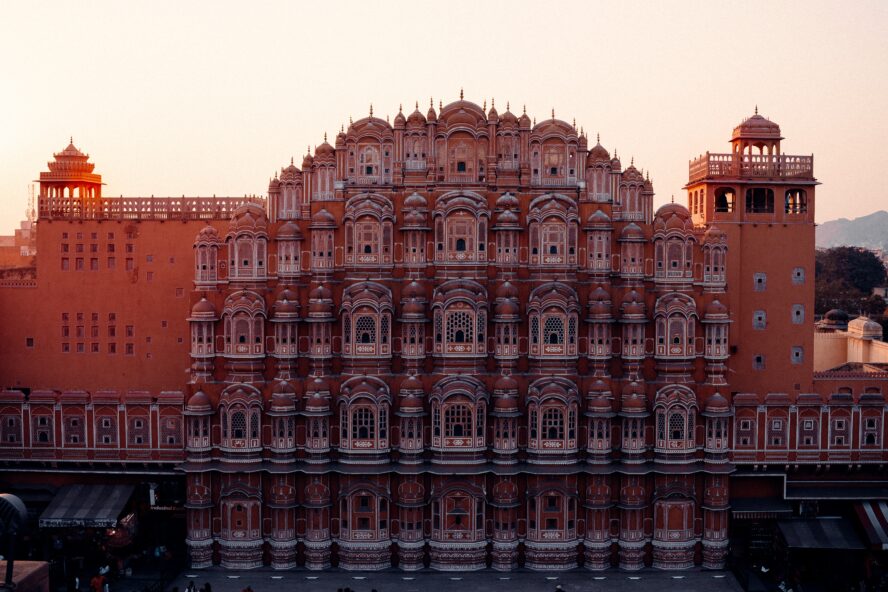 I am neither a professional nor avid traveler, but I would never miss a chance to visit a new place. All credit to my family who have instilled this trait in me.

Let me share one such trip to one of the most beautiful places in our country. We went in October 2020 after the lockdown was over and things were returning to normal, (or so we thought). My coolest parents had to go to Delhi for work and decided to do so via Jaipur because we hadn’t yet traveled to Rajasthan. 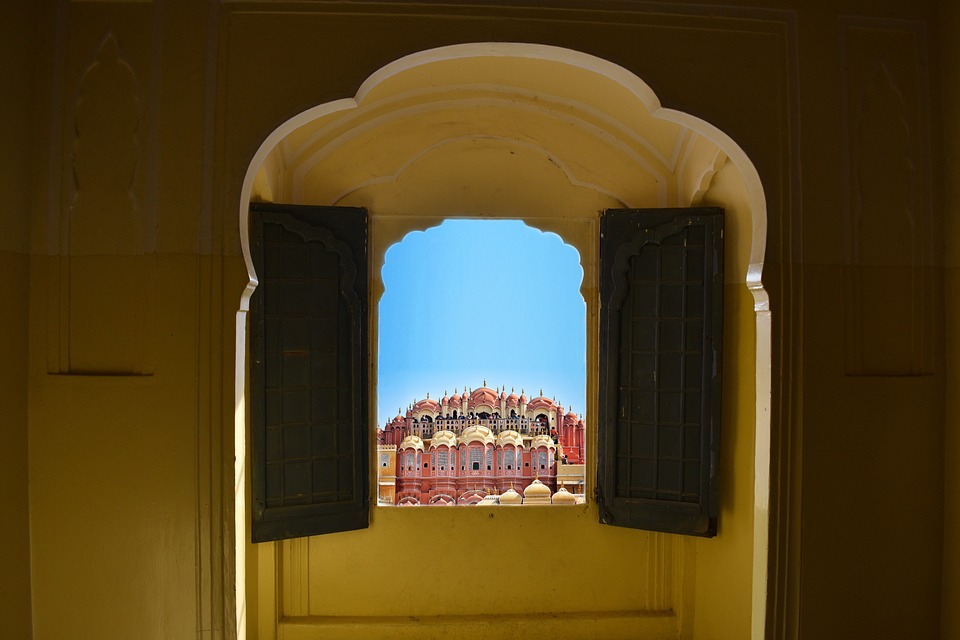 Jaipur was painted in pink in 1876, for the visit of the British royal who would go on to become Emperor of India. Pink denoted hospitality, and the city’s ruler went on to make it illegal to paint the old city in any other colour. (Image by Ravi Gupta from Pixabay)

So, if you are in Jaipur and have only one day to spare, don’t just sit in your room and scroll through social media, here are some places you must visit.

Nearly 3 centuries old, Chandpole Bazar is one of the earliest markets in the walled city of Jaipur. It’s named after the Moon God and was symmetrically designed to protect merchants & clients from the elements. There are currently over 350 shops in the market selling everything from handcrafted products to clothes, food & jewelry. (Photo from MMTP.)

We stayed in a busy area of Jaipur known as Chandpole, or The Moon Gate. This area is in itself a treat for the eyes, especially at night. The market has well-organized shops all painted in pink – which signifies the pink city.

A blend of Mughal and Rajasthani architecture, the 5-storey, Hawa Mahal was built in 1799. It’s shaped like Lord Krishna’s crown because the Rajput ruler behind it was a devotee of the Hindu deity.

Just near Chandpole, in a busy market, stands this enchanting fort. Popularly known as Hawa Mahal – The Palace of Wind – it was built as a summer retreat for the king and his family. The small windows in the palace are known as Jharokhas. It is said that these were created for the rani as they were not allowed to step out of the palace or go to the open balcony area, so it was through these jharokhas that they peered at the world outside.

An iconic landmark, the Wind Palace is made of pink sandstone.

The honeycomb-hive Hawa Mahal was built as an extension to the palace for the royal ladies, who – at the time – were not supposed to be seen by strangers or appear in public. Projecting from the palace facade, the Jharokha stone windows allowed them to witness daily life and royal processions on city streets without being visible to outsiders. The 953 Jharokhas also let in a breeze that keeps the palace cool and airy.

There’s a cafe just across the road from where the beauty of the Hawa Mahal can be seen more clearly.

“The Jantar Mantar observatory in Jaipur is the most significant and best preserved set of fixed monumental instruments built in India in the first half of the 18th century…an outstanding example of the coming together of observation of the universe, society and beliefs.” – UNESCO

Another famous place to visit when in Jaipur is the Jantar Mantar, an observatory from medieval times. Now a UNESCO World Heritage Site, it is among the largest of five astronomical observatories built by the founder of Jaipur, Maharaja Sawai Jai Singh II, in northern India.

This place of attraction makes a tourist feel both curious and astonished to see how well people at that time created such designs without advanced technology.

Today, Jantra Mantra has 19 main astronomical instruments or groups of instruments. They were generally constructed of brick rubble and plaster, but a few were made of bronze. They were built for naked-eye observations of the celestial bodies and precision was achieved through their monumental dimensions. Source: UNESCO Astronimical Heritage

Using the position of the sun, this scientific place is able to tell the time of the day, observe the orbits of the planet, and the movement of celestial bodies.

This fort, located among the craggy hills of Amber, was the bastion of the Rajput Kachwaha clan before they moved their capital to the plains, to what is now known as Jaipur. Construction on the complex was started in 1592, and it’s made entirely of red sandstone and white marble, used in a a beautiful blend of Mughal and Hindu styles. (Source: Incredible India.)

Amber – pronounced Amer – Fort or Palace, is now also a UNESCO World Heritage Site. Situated on the outskirts of the city, construction on this magnificent place was started by Raja Maan Singh I.

Meant as a strong haven against invaders, it took 100 years to complete construction on this stunning fortress, which also features countless intricacies such as carvings, mirrors, and precious stones.

The architecture is just spell-binding; every minute detail and carving is so beautiful that one is left awestruck.

Perched above Maota Lake, Amer Fort is one of the most visited sites in India. (Image by RichardMc from Pixabay.)

There is a lake in front of this palace which is known as the Maota Lake, which enhances its beauty.

This palace can be visited by a person in 2–3 hours, even more if one is willing to go to every nook and corner. It’s definitely a must-visit place when in Jaipur. 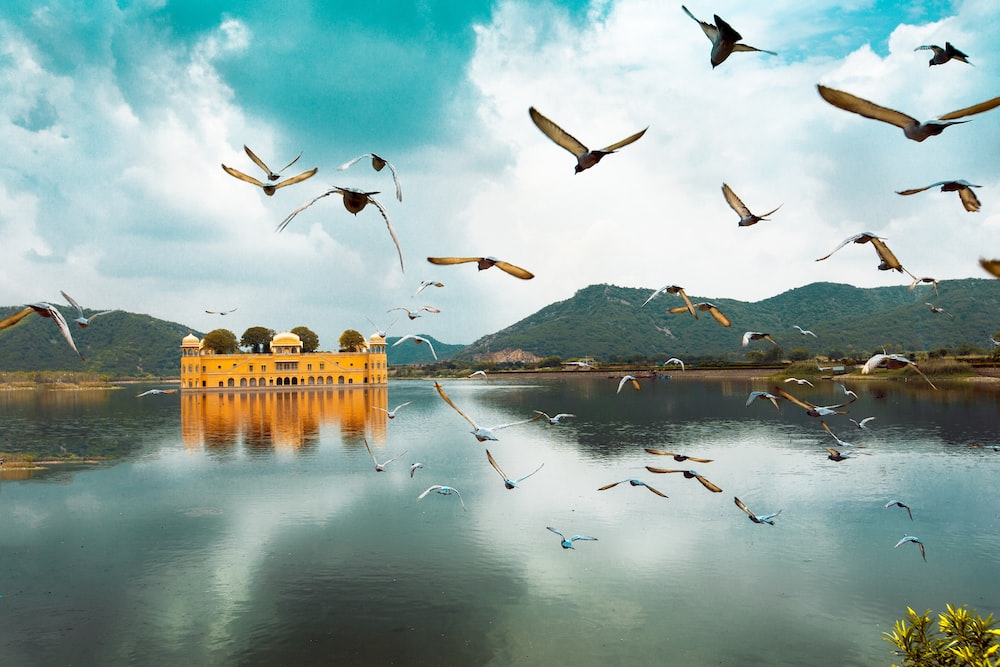 (Image by Aditya Siva from Unsplash.)

This is yet another splendid palace, built within a lake, which is why it is known as Jal (water) Mahal.

Situated in Mann Sagar Lake, it looks beautiful at night when the reflection of the Palace can be seen in the water.

A tourist is not allowed to enter the palace, so one may just see it from the road while going to Nahargarh or Amber Fort. This saves time, and you get to see another monument just by passing through.

I felt really overwhelmed as Rajasthan is one the places with a rich heritage, and splendorous palaces and architecture. So, I was really excited to visit Jaipur. I had just seen these forts and palaces in movies or on social media, and seeing them in person is a different feeling.

TOURING IN A TIME OF PANDEMIC

Proper precautions were taken at each heritage site, proper sanitisation and entry without mask was not allowed, social distancing was maintained. And yes, every place was open for tourists.

There were also tour guides at each and every place.

These are some of the famous places one can visit when in Jaipur and has less time to spare that is only a day.

There are many other places and monuments one can see like:

But in order to cover all the places in Jaipur and a few on the outskirts, a person needs more time that is 3–4 days. I only had one day and tried to cover as many places as I could.

Aside from the heritage sites, Jaipur is also famous for its beautiful bangles, traditional dresses, jutis, blankets, and other handicraft, like the katputli wooden puppets in the photo above, and its food, like dal bati churmas.

I visited a restaurant on Amer Road that has this tasty Rajasthani Thali as I am a foodie and was crazy to taste dal bati churma. And trust me, it was worth it.

HOW TO GET THERE

You may reach Jaipur by airplane, train or bus, and then take a taxi, or small auto/tuktuk to every destination except for the Nahargarh Fort and Amber Fort, which can only be visited via taxi or car. I went in a personal car from my city to Jaipur, but took an auto for excursions within the city

This was my short yet wonderful trip to the Capital of Rajasthan, popularly known as the Pink City- Jaipur. Do visit this amazing place and it will welcome you with a warm heart saying – Padharo Mhare Des.

About the Author:
Ajita Sahu is a student from Madhya Pradesh, India pursuing a degree in Chartered Accounting and an MBA. She loves writing and sharing her experiences so others can relate to it.
All images are by the author unless otherwise indicated.