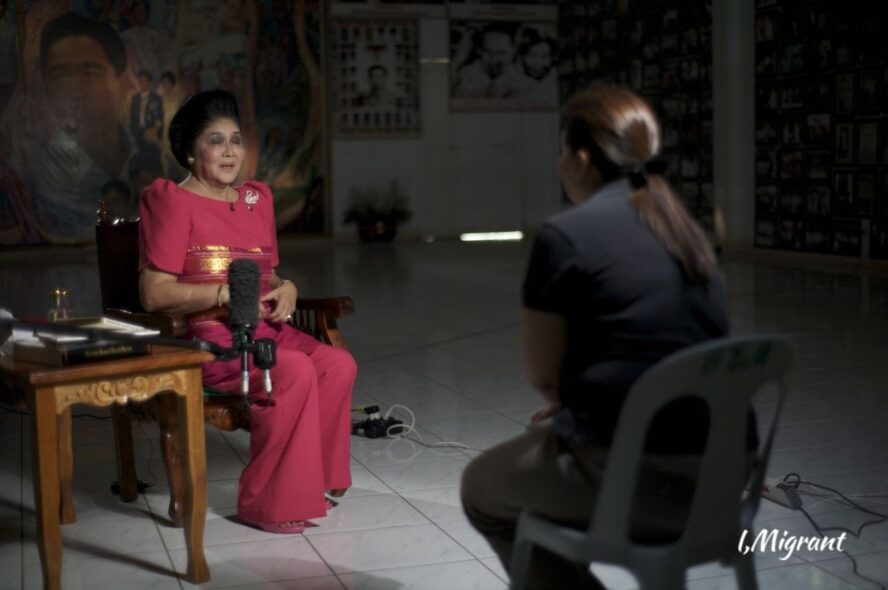 What a birthday present! On the cusp of her ninety-third birthday, (yes, 93!) the infamous Imelda Romualdez Marcos has her most fervent wish come true: her only son — and late husband’s namesake, Ferdinand Jr. — was inaugurated president of her “beloved Philippines”. Full circle. Vindicated. Triumphant. That is precisely how she will see it. The same country that ousted her family in 1986 has reinstated them. I say ‘them’ because everyone knows that in the Philippines, when one person ascends to power — the whole family rules. And how they have returned: largest mandate, etc. etc. — vote buying notwithstanding.

So, with the Marcoses back at the forefront — without ever having to pay for their crimes — here’s a look back at what it was like to meet the ‘icon’ herself when they were still trying to regain their foothold.

A version of this was first published on the Al Jazeera English Website in 2010.

BY ANY OTHER NAME

By her own admission, she’s been called many names: “evil”, “greedy”, “corrupt”, the “Iron Butterfly”. She lets it all wash over her like rain bearing down on a sunflower.

“They do not know the real me,” she intimates with a smile.

Still standing tall at 5”8, this energetic 80-year-old grandmother has also been known for her charm and her beauty. And she takes pride in being among a select few in the world who can be identified simply by one name: “Not even the Queen of England is known just as Elizabeth,” she offers. “She has to be referred to as Queen Elizabeth the Second” — a pause — “but there is only one Imelda.”

We headed for far north of the Philippine capital Manila to see her. She was in the middle of campaigning for a congressional seat to represent her late husband’s home district.  And she was the popular choice.

“Marcos was not a dictator,” she said emphatically, referring to her husband, the former Philippine president, by his surname. “He always checked with the people before taking any action — plebiscites, elections — Marcos was dedicated to the Filipino nation.”

It was easy to see that she believed it. Never mind the fear the mere mention of his name instilled in many of his countrymen during his 20-year-rule. Or the fact that many of those elections were infamously rigged in his favour.

A LITANY of Sins

“In the end, the truth will come out… and set us free,” she stated. Like an oft recited litany, she listed a number of the court cases filed against her that she’s since been acquitted of. Almost 1,000 accusations (at last count) of graft, corruption, and ill-gotten wealth.  A few are still pending, but the former strongman’s widow has not had to serve time for any of the wrong-doings she’s been charged with.

After her husband died, Imelda ran for president in 1992, when she was allowed to return from exile in Hawaii.

In 1995, she ran for to represent her home province in Congress – and won a three-year term.

“The work has to continue,” she insisted. “Look where the country is now –” An unpopular government headed by an unpopular president (Gloria Macapagal-Arroyo), riddled with allegations of corruption, human rights violations, and seen to be coddling cronies and encouraging patronage politics. Not much different to the Marcoses’ time in power. But for Imelda, it is “necessary” to return to public service — in response to “a higher calling”.

Known as a conjugal dictatorship, the Marcoses were ousted from the presidential palace in 1986 by a People Power revolution that installed a housewife named Cory

Aquino in the presidency. Aquino went on to be recognised globally as an “icon” of democracy, and became, for a time, a revered heroine in the Philippines of mythic proportions.

“We had so much more to do,” Imelda said, recalling that tumultuous time. “We had big plans for this country, Marcos and I” — a pause — “before we were rudely interrupted.”

A Return To Glory

Her clothes a little worse-for-wear, Imelda prepared to meet her public. She didn’t shy away from admitting that she now “recycled” her once-glamorous and unique outfits – patching bits and pieces of old gowns together like an experienced designer. After all, she no longer had money of her own to speak of, she insisted. But no matter what she wore, she always — always — carried it as if draped in lace and ermine. 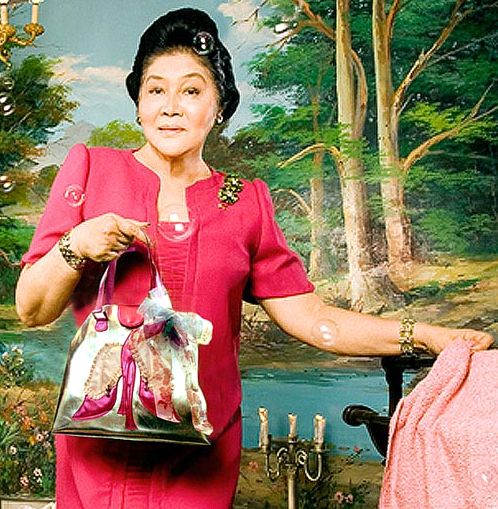 Imelda also proudly spoke of the bargain shops she’s bought plastic gems from, and boasted that the gift lay in knowing how to “dress it up” – to give off the illusion that they are priceless.

And indeed, she wore her recycled clothing and rhinestone jewellery as if dressed for an audience with the Queen. Even turning it — briefly, if ironically — into a ‘fashion line’ in 2006 that was for sale to the public. The “Imelda Collection” of rubbish and replicas. Turning trash into facsimiles. Dressing up glass beads and plastic to look like precious stones and diamonds. It was as if she was in on the joke with the consumers and not just laughing at their credulity.

Imelda changed thrice in one day – each ensemble carefully considered to suit whatever audience she might be facing. She always said that one had to dress well no matter whom one was seeing.

That even “the poorest farmer” appreciated that she dressed the same to meet them as she might a head of state. “It makes them feel important. They are important.”

BACK TO THE FUTURE

She longs to return to those days – to reinstate them as she remembers them. “We are committed to what is right. To return to the true, the good, and the beautiful.”

We spent almost twenty-four full hours with Imelda, listening to her recall encounters with leading world figures, all of whom she was on a first-name basis with: “Saddam this,” “Fidel that,” “Nixon was a good president” — all while riding in her bullet-proof suburban to visit a newly-bereaved supporter’s family. Then, dropping by a newly-opened mall to have a meal with her in the food court, amongst ‘the people’. She very casually handed out 1,000 peso bills to every hand she shook — and a few she didn’t. She just slipped the bills into people’s pockets. Like with the security guards and the vendors. Of course, she fed everyone around her — but she herself didn’t eat. She made sure to never be filmed consuming food in public. The whole experience was an introduction to Imelda and her Foibles. Imelda 101. All in a day’s work.

Imelda Marcos using a journalist’s iPod to hear for the first time a musical written about her: David Byrne’s Here Lies Love. “I am flattered,” she gushed.

Passers-by regarded her with interest and just a hint of fascination.  It was like a star had fallen from the heavens to be amongst them.

But at that point, that star no longer blinded with its radiance. In minutes, people returned to what they were doing — and looked away. Which was the last thing the Lady with the Baubles and the 1,000-Peso Bills wanted.

Regardless, she remains — undeniably — larger than life.

“A survivor,” she stated. A historical figure that won’t be banished to history just yet. She refused to be remembered just for her massive — obscenely so — shoe collection.

It was very easy to get caught up in her world, which exists somewhere between folly and indubitable faith.

At the end of the day, as she herself put it: there is only one Imelda.
* * *
About the Author:
Marga Ortigas is a bestselling author and podcaster who spent 3 decades as a journalist, working for CNN International and Al Jazeera. Her novel The House on Calle Sombra was published by Penguin Random House SEA in December 2021.