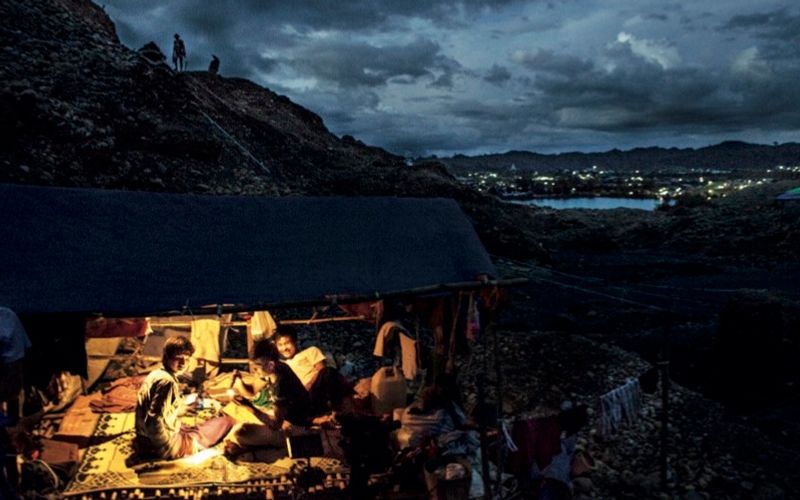 Her breath smells of menthols.  Her ragged denim shorts are damp with spilled beer.  She will not stop laughing.

I suppose her forced cackle is supposed to convince the men in this bar – myself included – that we’re all having outrageous fun tonight.  Yet that flutter in her voice betrays an inner panic.

Pin is 35 and slender with a copper-blonde dye job.  She’s liberally spritzed perfume, strong stuff that puts a chemical tang in your sinuses.

She really should not be here right now.  Nor should I.  This entire strip – a row of open-air bars – should be cleared out.  After all, the city is currently under attack from jihadi bombers.

But Pin and I and a few other customers remain in this gritty bar.  It’s one of many lining the red-light promenade in Sungai Golok, one of Thailand’s southernmost cities.

Pin says her boss is adamant about keeping the bar open during attacks.  So she just douses her fear in cheap lager and gets on with it.

As in most provincial Thai towns, the golden spires of Buddhist temples jut above Golok’s low-slung skyline.

But in Golok, they share that skyline with minarets.

At around sunset, the central brothel district begins to shake off its day-long slumber, and the families who live downtown start yanking their gates shut.  They know what’s coming.

Once the moon rises, noisy out-of-towners begin streaming into the city.  Neon light drenches the streets.  High heels clatter on the asphalt.  Bad Top 40 music roars from the nightclubs.  The air is filled with hoots and catcalls and thudding bass.

But if you stand outside the bars, and strain your ears, you can hear a few solemn voices – each straining to pierce the sonic thicket of high-decibel pop.

This is the sound of muezzins, crying out to Allah from nearby mosques.  The prayer calls are a reminder that this pocket of vice intrudes into a land where more than four in five people follow Islam.

Here in Thailand’s so-called “deep south” – a cluster of provinces collectively the size of Qatar – most people are Muslim.   But generally speaking, the Muslims are not in charge.

Buddhism is Thailand’s official religion and, even in the Muslim-majority south, a small Buddhist minority holds almost all the power.  They are the bureaucracy.  They are the army and the police.  They own the nightclubs and brothels that power this little town’s economy.

Yet for all their power, the Buddhists here remain surrounded. Buddhist temple in a rural Thai town.  (Photo by Mathew Schwartz on Unsplash)

Golok’s southern border is Sword River, a ribbon of neck-high water that constitutes an international boundary.  Beyond its shores is Malaysia: a nation of rubber trees, fish-head curries and even a few skyscrapers.  It is a country where Muslims rule outright.

But the province across Sword River from Thailand is not the Malaysia of Kuala Lumpur, the nation’s semi-cosmopolitan capital – a city filled with halal hipster cafes and Muslim mall rats.

Known as Kelantan, it’s more like Malaysia’s Kentucky.  Rural and religious, Kelantan is controlled by an all-Islamic party.  Its elders attempt to enforce Sharia law through squadrons of morality police.

This is a world totally at odds with Thailand’s freewheeling culture of naughty fun.  That means no extra-marital canoodling.  No whiskey sodas.  No spaghetti straps.

It means a woman with Pin’s job – swigging beer, pouring herself into strangers’ laps – will go straight to jail.  In Kelantan, women who besmirch religious piety are punished by the state so there is no need for hardliners to strike from the shadows.

And yet, on the other side of Sword River, everything that makes Thailand infamous is available in abundance.

Sword River divides these two worlds, but it’s only a skinny band of brown water – a membrane too porous to stop men from slipping out of Eden and into Babylon. After dark, Golok’s sidewalks become a parade of male excess.  Guys retch into the shrubbery.  They drink until their legs turn to gelatin.  Some have to cling to their newfound female companions to stay upright.

None of this behaviour really distinguishes Golok from Thailand’s more notorious brothel districts.  When they want to debase themselves, men from Kelantan tend to act just like guys from Berlin, Mumbai, or Cincinnati.

What truly distinguishes Golok as a sex tourism hotspot is the looming threat of violence. I flag down a Chinese-Malaysian guy ambling down Charoenkit Road, the town’s repeatedly-bombed main drag.  He’s a plump 30-something, forehead dewy with sweat, with a mop of messy black hair – and he exudes the scampish euphoria of a fourteen year old in a sex shop.

After a brief chat, I ask him if he feels scared in Golok.

“Because,” I say, “there’s an Islamic insurgency here.  Come on.  You know that.”

The more men I chat up, the more I hear some version of this answer.  The aforementioned jolly grandpa in the polo shirt?  He’s equally unflappable.

“Not that long ago,” I tell him, “there was a car bomb right here where we’re standing.”

“And you’re not thinking about that when you go partying?”

He rambles for a bit, gesticulating wildly in the air.  The girls he’s hired for the night stare down at their sparkly heels.  Finally grandpa arrives at something resembling a point.

“Look, in Malaysia, as an Islamic country…” he says, trailing off.

“You know?  Alright?  I don’t have to elaborate more on that.  In Malaysia, if I say this, I would be…” THWACK!  He mimes shackled clamped around his wrist.

I think I get what he’s trying to say.  Living under Sharia law is so suffocating that guys will do anything for a night of boozy liberation.  Apparently, even jihadi bombs can’t drown out the siren call of Johnny Walker and anonymous sex.

But there’s another reason he’s willing to roll the dice on a weekend in Golok.  This place is as fortified as it is raunchy.

In the shadows. whisker-lipped army recruits stand guard.  They’re posted up outside karaoke joints, in tows or threes, sweating inside their bullet-proof vests.  Almost every bar facade, every dark corner, falls under the gaze of security cameras attached to light poles overhead.

About once an hour, a blast-resistant armored vehicle cruises the promenade.  Half tank, half Hummer, it’s a military vehicle produced in South Africa known as a REVA.  It’s popular with armies in Yemen and Iraq.  From the REVA’s roof turret, soldiers can scan the sea of boozers for suspicious activity.  Their fingers rest on mounted machine guns.

This is what it takes to keep Golok’s nightlife buzzing.  It’s more than just a red-light district.  This is a Green Zone for men on the prowl. “Malaysians,” Benz says.  “In their country, everything is a sin.  Everything guys do – chasing girls, drinking beer – it’s all a big sin.  That’s why we’re here.  To help them release it all.”

Benz, looking bored, starts fiddling with her Samsung.  I’ve had my fill of this place.  I pay up and slink out of the club before Aunty can badger me for a huge tip.

Downstairs, in the hotel’s ballroom. the atmosphere is less caustic but equally depressing.  It’s strewn with men eating a tables, taking a break after bouts of lechery.  They’re sucking on cigarettes between bites of mediocre Thai food.

In the corner, a plump female crooner belts out “My Heart Will Go On” by Celine Dion.  She appears to have applied an entire cosmetics aisle to her face.

But the singer is largely ignored.  Crowd participation is limited to sympathy applause from Thai waiters, all lined up along the wall in unfashionable slacks.  The only other entertainment is a TV mounted to the wall.  It’s running a local news program at low volume.

The screen flashes to an image that startles me.  It’s a photo of a dead woman, half covered by a sheet, surrounded by uniformed men.  Her body is lit by flashlight beams.

It’s the woman who was killed just a few blocks away.

Now the news program is running closed-circuit security footage of the bombing.  They’re playing the video on a loop.  Everyone in the ballroom can watch Sarika die over and over.  Her murder comes in a white flash that flings pixelated debris across the screen.

A few of the Thai waiters stare up at the screen.  The sex tourists look bored.  The lady on stage begins warbling through Eric Clapton’s “Tears in Heaven“.

Through the ballroom’s windowed facade, I can see the strip, its pink lights blining across the rain-slick road.  This place will erupt again.  It’s just a matter of when.

Maybe a few months will pass before another woman like Bam is picking glass out of her hair.  Golok might even go a whole year before the next Sarika is killed by an indiscriminate blade of shrapnel.

But when the next attack comes, I’ll probably be somewhere else.  Same goes for the heavy-lidded patrons in this hotel.  Less fortunate are the working women of Golok, reporting night after night to the barroom front lines – where the night brings threats from drunks and zealots alike.

**These are excerpts from “Neon Jihad”, a chapter in the author’s recently released book on Southeast Asia’s underworld – “Hello, Shadowlands”.  Posted with his permission.**

Patrick Winn is an award-winning investigative journalist who covers crime and black markets in Southeast Asia.  To mine unheard stories, he enters the worlds of guerrillas and vigilantes.  Winn has received the Robert F. Kennedy Journalism Award and a National Press Club Award.  He’s also a two-time winner of Amnesty International’s Human Rights Press Awards among other prizes.He is currently on a U.S. book tour for his narrative nonfiction work – “Hello, Shadowlands: Inside the Meth Fiefdoms, Rebel Hideouts and Bomb-Scarred Party Towns of Southeast Asia“.