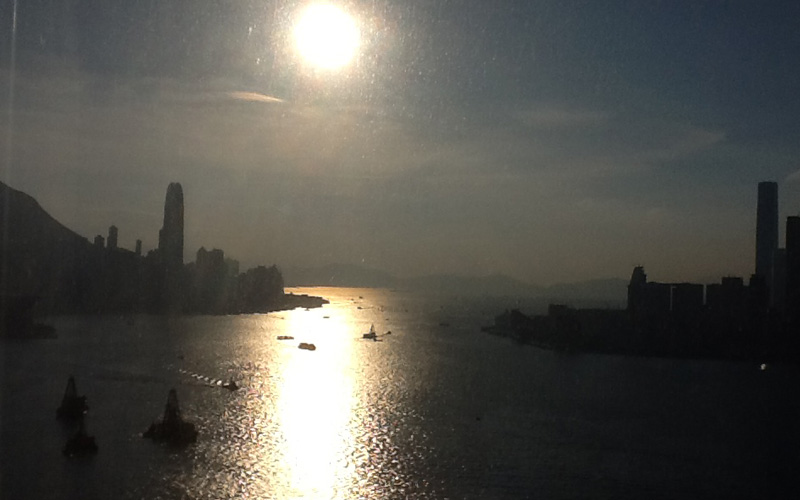 The half-hour fireworks display in Victoria Harbour is long over, but the tens of thousands of voices that were raised in protest in Hong Kong on Sunday still reverberate in the deeply deceptive night.

Fifteen years since it was handed back to China by British colonisers – and the unique “city-state” of over 7 million people saw its third Chief Executive assume office with the Chinese president on hand to witness the swearing in.

It was a ceremony many Hong Kong residents watched with pallor.

“It looks too much like something out of Beijing…”

They dreaded to admit just how much over the years “the mainland” had influenced the state of affairs in this, its singular, semi-autonomous, off-spring.  The uniformity of the colours, the carefully stage-managed proceedings, even the fact that Mandarin was spoken instead of Hong Kong’s official Cantonese was noted with disappointment by some viewers.

And that seemed to be the over-riding sentiment of the day.  Disappointment.  With where they were, and what they had become.  Oh sure, there were those that were grateful for “everything” being re-attached to China had meant for Hong Kong.  Among other things, the “reunification” cemented Hong Kong’s role as an international hub for business by being the “friendlier” doorway to the economic giant that is China, but then, there are the “problems” that re-integration has brought on.  The influx of wealthy mainlanders has bumped up property prices, and put a strain on social services.  The income gap between the rich and the poor has widened to a record discrepancy.  And for the first time in 15 years, more Hong Kongers have expressed discontentment with not just their public officials, but also with their city’s relations with China.

“There is too much interference from Beijing,” many residents complained.  “We are not like them.”

Despite a shared, albeit, some say “problematic,” cultural history, there is still a feeling here that “mainlanders” are a different breed entirely.  They are referred to by a large number of city residents as “the Chinese” as opposed to “Hong Kongers” – which is what these same city folk call themselves.

And close to half a million Hong Kongers took to their city’s streets to take full advantage of the civil liberties that their brethren on the mainland aren’t really afforded.  The anniversary of their handover back to China has become an annual opportunity to air their grievances on a wide range of topics – from clamouring for political reform to ascertain their continued “freedoms”, to standing up against animal cruelty, and protecting the rights of migrant workers.  There were others, too, who came out to be heard on a number of more personal problems: from business deals gone wrong, to alleged injustices suffered in hands of the system of social services.  Any frustration, any resentment, anything to say – today was the day to let it out.  Many parents could be seen with their young children in tow, encouraging them to experience the day first-hand.  Almost as if wanting to introduce their offspring to who they were, and what it meant to be a Hong Konger.

It was an excuse to exercise their rights under their “flawed”, semi-autonomous, democracy.  As if needing to remind themselves that they still can.  That the mainland hadn’t completely taken them over…yet.

And that is the fear here – that their identity will slowly disappear, along with their democracy.  That they will be “assimilated” into China.

“Maybe we can start a revolution and turn things the other way around,” one hopeful Hong Konger said.  “Maybe China can be assimilated into Hong Kong!”

But before any more thought could be given to that idea, that dreamer’s voice was drowned by the echoes of the continuing chants of dissatisfaction that pummelled through the dark, descending, Hong Kong night.

And in the shadows of China’s self-proclaimed “one country, two systems” success story, “dis-located” Hong Kongers hoped to shine a light on their own reflection.