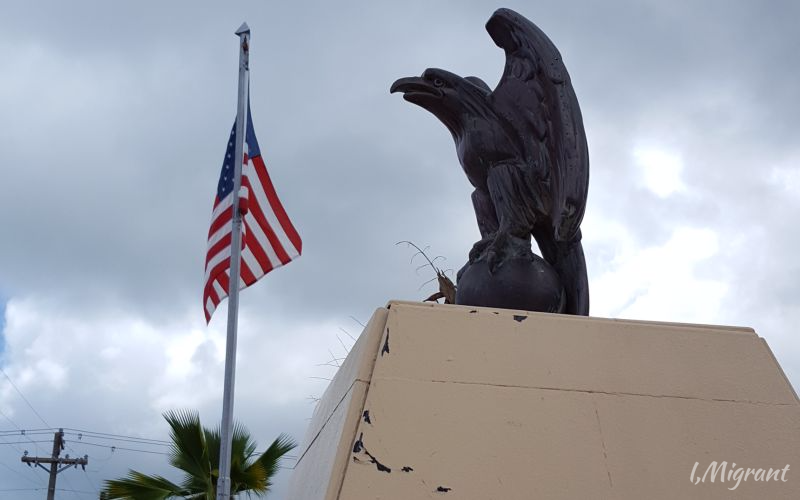 It shimmers shyly in the Western Pacific like an unpolished diamond in a nest of sparkling opals.  Its size belying its strategic geographical importance. Saipan is the capital of the Northern Mariana Islands, which are strewn like gems from a broken bracelet across the Pacific corridor that links east and west – between Asia and the United States.  It’s played vital roles throughout history, for European colonisers in the middle ages to imperialist armies in World Wars 1 and 2.

Now, Saipan prides itself in sitting at the intersection of the modern world’s three largest economies – China, Japan, and the outer fringes of the United States.  Which is what it is most proud of.

The Northern Mariana Islands – or CNMI — are a US commonwealth.  Like Puerto Rico.  Its currency is the US dollar, its people are US citizens, food servings in its restaurants are as large as they are on “the mainland”, and the license plates on its cars loudly declare: “CNMI – USA”.

But despite choosing to be a US territory in the 70s, CNMI retained control over many of its laws – including immigration and employment.  In the 80s, to drive development, it swung its doors open to skilled migrant labourers.  Thousands came to fill jobs in the service industry and garment manufacturing, expecting a better life.  A large number were from the Philippines.

“I even brought a jacket,” recalled Philippine-born Rudy Francisco, confessing his naïve atmospheric expectations of “being in the US”.  Or at least “close” to it.

It was supposed to be the land of promise and dreams-come-true, he shared bitter-sweetly.

He couldn’t have been more wrong.

We met him in a ramshackle hut built on borrowed land, hidden from view behind tall foliage.  He was wearing clothes that seemed he’d been in them, unchanged, for days.  He had no running water, and no electricity.  He had no job, and no savings.

“It’s amazing how few friends you realise you have when you lose everything,” he told us.

Rudy Francisco had been living in Saipan for over twenty years.  Like many other migrant workers, he lost his job when the economy went on a downturn after factories closed and moved to cheaper pastures in Southeast Asia.  He couldn’t find new employment, and worse, he still hadn’t been paid most of his salary from his previous job.  He’s owed over $60,000 USD in back wages.

It’s a story shared by many other migrants.

“We worked under rather unfavourable conditions,” another foreign labourer, who didn’t want to be named, told us.  “We lived in dorms, were ferried back and forth to the factories, and many of us didn’t receive our full pay.”

A few others said the situation was akin to slavery.  They recall being grateful years ago when they heard the US would be more involved in the Northern Marianas and take greater control over employment conditions.  The wronged workers filed a suit with the courts then – and won.  A settlement was ordered paid to them, but they still haven’t received any money.

The US has now also taken over border control – which means those who don’t have the proper leave to stay can be deported.

Leave-to-stay entails having an employer willing to petition you.  Problem is, with the economy being as bad as it is, such employers are scarce.

On top of this, though most of these migrant workers have been in CNMI for decades, none of them can claim residency because previous Marianas employment law didn’t allow it.  So now, each one has to file a case with US Immigration to be given the right to stay where they have lived most of their lives.

And the immigration department isn’t working as fast as they’d hoped.

Most impatient of all, is CNMI’s Governor Ben Fitial.  He has been lobbying Washington to give him back the power to deport the “unwelcome visitors”.

“Don’t get me wrong,” he told us.  “We’re grateful they came when they did and helped us get to where we got, but it is time they go home now.”

As far as Gov. Fitial is concerned, migrants like Rudy have become a “burden”.  More than that, Fitial sees them as a “humanitarian problem”.

“I don’t like seeing the conditions they have to live in,” he explained.  “It’s not good for them either.”

The governor knows about the lot of people like Rudy.  Barely surviving on meagre scraps.  Unable to legally work, these now-unwelcome migrants take menial jobs where they can for lesser pay.

“They’d be better off elsewhere,” Gov. Fitial said, and that way, they also wouldn’t be taking opportunities that should be going to the locals, or “my people” as he called them.

There is quite an undercurrent of anger going in both directions between the migrants on one side, and Fitial and the native islanders on the other.  Many migrants feel used, while local officials say they’re the ones being taken advantage of.

There is also a lot of frustration aimed at the US.  For seeming to dilly-dally and equivocate on matters that could change thousands of lives.

“They’re supposed to be champions of human rights in the world,” Rudy exclaimed.  “They get involved in all the cases of human rights abuses in other countries,” he said again, “but here in their own territory – why do they do nothing?”

Gov. Fitial feels his hands have been tied on the matter, and he bemoans the fact that though CNMI is “part of the world’s largest economy, it isn’t reaping any benefits of it”.

When we left Rudy, he was lighting a fire to cook some rice and boil a few vegetables he had taken from a garden he tends.  The weight of his sorrow is plain to see: he feels betrayed… by the place he’d made his life in, by his hopeful innocence, and his dreams.

*An earlier version was first published by Al Jazeera.

UPDATE:
Ben Fitial resigned as governor in 2013 after being impeached on charges of felony and neglect of duty.  Two years later, he became the the first CNMI chief executive to be convicted of misconduct and corruption.  He pleaded guilty and asked for pardon.

Fitial’s 1-year prison sentence was commuted so he could receive medical care in the Philippines.