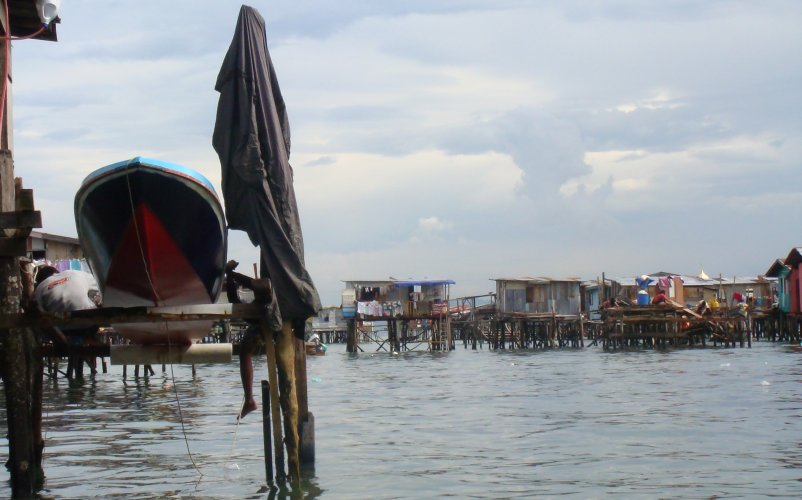 There’s no soft, spectacular sunset over Sabah this afternoon. No wisps of crimson, or feathery touches of pink.

Dusk is settling like a heavy orange yolk suffocating what’s already been an oppressive day.

The mackerel-coloured sea is choppy, leading the small boats moored around the harbour in a syncopated dance.  Their lights begin to come on… looking like fallen stars twinkling on the bobbing cobalt ocean.

The boardwalk is now dipped in colourful neon, and the stalls in the waterfront market begin to raise their rainbow tents.  They look like the large colourful sails of the traditional vintas from Zamboanga in the southern Philippines.  It’s where many of the vendors originate from.  No surprise then that’s it now known as the “Filipino market”.

For many Filipinos – like the market vendors – looking to escape poverty and civil strife in the restive southern Philippines, Sabah is the promised land, despite being Malaysia’s poorest province.

Even the weather here is slightly better.  The annual typhoon season that cuts through the Philippines doesn’t hit Sabah, which lies directly beneath it, giving it the moniker – The Land Below the Wind.  The ideal place to seek shelter. Hundreds of thousands of Filipinos first came as refugees fleeing a separatist war.  A large number have gained legal status.  But the flow of people from the southern Philippines has only grown over the last 30 years.

The Malaysian Human Rights office estimates there are now close to two million illegal immigrants in Sabah – more than the number of Malaysians themselves.  And three-quarters of those migrants are reportedly from the Philippines, most of them “hiding” in plain sight.

Across the water from the capital Kota Kinabalu – just five minutes away on a small motor boat – lies Pulau Gaya.  A marine reserve – and an eyesore, as far as many locals are concerned.

Pulau Gaya is a throng of scraggly, stilt wooden structures connected by narrow labyrinthine planks.  It serves as a hive for thousands of illegal migrants whose population doesn’t diminish regardless of how many times their crammed houses are demolished by officials.

The migrants in Pulau Gaya keep rebuilding, and their toothpick metropolis keeps growing. It doesn’t take much to take root here – the residents all help each other out.  Everyone recalls how tough it was to get here in the first place and is happy to help a new arrival adjust.

And adjusting isn’t easy.  Every day, their lives here hang in the balance – and having to walk the planks to get around is a constant reminder of how precarious their existence is.

Immigration officials came by for an unannounced spot-visit when we were there.  They said they were going to take a census, offering the possibility of eventually legitimising the migrants’ status. But few believed them.  A number of people slipped quietly away from view, while the rest hung around seemingly bored, used to such machinations.

One man whispered that it was easy to get past Malaysian immigration police.  He claims to have paid them several times to look the other way when it came to his “illegal” status.

Workers in the Human Rights office agree, saying taking bribes is not uncommon.  “Enforcement has become part of the problem,” we were told.

“What is said officially is one thing, what is acted on – is another.”

Pulau Gaya is also known as a crime frontier, and its residents are usually blamed for the problems across the water – drugs, prostitution, thievery, etc.  It’s not a reputation the migrants appreciate.

“We are all here to make a life for our families,” 53-year old Nasser said, emphatically.  He’s been in Sabah for over 20 years, yet he and his 12 children, who were all born here, are still considered illegal.

Nasser has been caught by Malaysian immigration police and deported to the Philippines 10 times.  Each time, he’s returned.

“They treat us like animals; they don’t want us here,” Nasser confessed.

“But our lives are here,” he added,  “even if it is hard.  Life was still harder in the Philippines.”

The illegal residents of Pulau Gaya know they are all on borrowed time – each day could be the day they’re deported.

“It’s not an easy way to live,” says our legal migrant Filipino guide.

Nasser is a lot like an elderly deportee we met earlier in Zamboanga.  He, too, had been repatriated numerous times only to keep returning to Sabah.  But the deportee said he was much too old now to face the risky sea voyage again.  Unlike Nasser, he didn’t have a family.  So now, he found himself alone, in a deportation centre in the southern Philippines, after decades in Sabah.  And all he has to show for his stint abroad, he says, are regrets.

Is it worth it?

We asked Nasser the same question.  He replied by saying he had one thing he wanted young Filipinos who considered coming to Sabah to know: “Don’t do it.”  His gaze intent and clear.  “I don’t want anyone else to go through what I went through.”  Then, he shook his head.  “I’m here already, it’s too late for me.”

It’s a sentiment that seems to weave through many in the illegal community, as if they are all gamblers knowingly playing with a losing hand.  The spoils of a civil war, both economic and cultural.  Defeated, and choosing to live as second-class citizens because it is still better than what they had.  Because it is “good enough.”

“It is so sad that we content ourselves with so little,” our guide said as we were leaving Pulau Gaya.  “When will we learn to demand more out of life?”

And then, he looked away and kept silent.

Millions came to Sabah seeking shelter, but most only got whiplash from the unpredictability of the winds.

*an earlier version was first published by Al Jazeera.