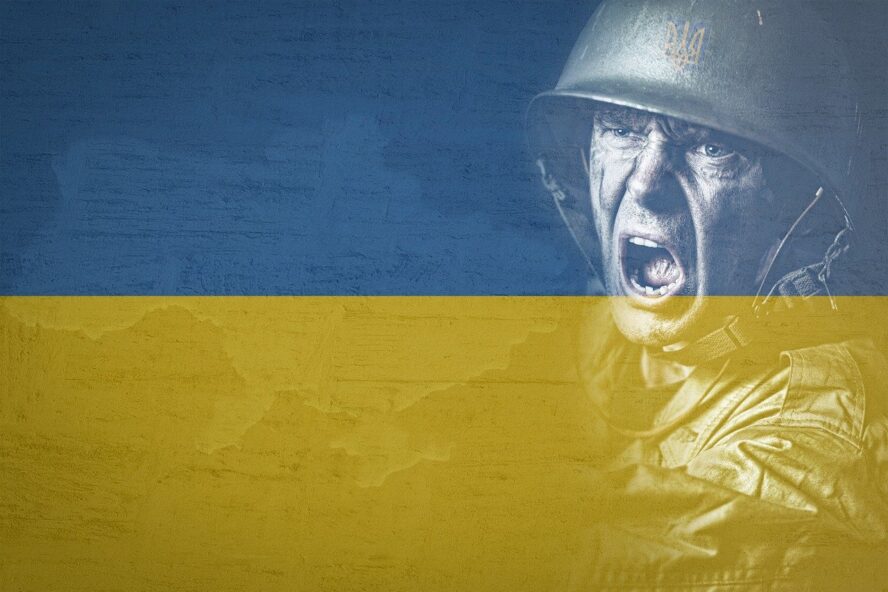 “But they weren’t children like the ones we are used to seeing suffering on television, these were blond and blue-eyed… that’s really important.”

These were, to say the least, the unfortunate words chosen by a Spanish evacuee from Ukraine when talking to the TV channel La Sexta upon his arrival to Spain.

The language was shocking, and appropriately ruffled feathers – it seemed to imply that the suffering of children with other hair colour and skin tones is different, that it should be less important and less painful to the audience. What should shock us most is the frequency with which we have seen this expressed repeatedly in the media of the strange blend that we call “the West“.

The Colour of Shock

In France, too, the chorus of disapproval raised its voice when the journalist Phillipe Corbé stated that there was a clear difference between the Syrian refugees and “these Ukrainians who drive cars like ours.” Charlie D’Agata of the prestigious CBS said: “This isn’t a place, with all due respect you know, like Iraq or Afghanistan that has seen conflict raging for decades, you know?” And he continued: “This is a relatively civilised, relatively European, and I have to choose those words carefully too, city where you don’t expect that or hope that it is going to happen”.

The American reporter’s aside, pointing to the care he was exercising to choose his words, betrayed his own discomfort with the impropriety of the idea that was forming in his mind. That you “don’t expect to happen” or “hope it won’t happen” appears to make the Ukrainians more worthy of our empathy than the citizens of other, less civilised and less European, countries. Such people are more used to suffering. It is intrinsic to them and their circumstances, which we are powerless to change: they don’t mind, so we don’t care.

And that different perception of refugees of different origins informs the different treatment they receive, too. Those children amassed at the border, blond and blue-eyed, are not like those others we are used to seeing suffering. We see them so often that suffering is, in our minds, embedded in their very being. We have seen images of African refugees stopped from boarding trains in Ukraine, making their escape from the violence of war more difficult, in favour of those of a fairer phenotype, of lighter skin.

Austria and Poland have resisted accepting refugees from Syria or Afghanistan, whilst now they receive Ukrainian refugees with open arms, even picking them up at the border to take them to their destination. In fact, some concerned citizens have driven the more than 3,000 kilometres that separate Ukraine from Spain to do their bit.

Much of the Middle East has observed with curiosity, and more than an arched eyebrow, the celerity with which the West has reacted to the Ukraine invasion with sanctions and public condemnation. But even Al Jazeera, albeit its English iteration, has received criticism. The presenter Peter Dobbie was moved by the “[…] the way they’re dressed. These are prosperous, middle-class people […] They look like any European family that you would live next door to”. Whether due to biological, socioeconomic or cultural traits, most western journalists repeat the shock of feeling identified with the characters in their news stories: a surge of empathy enhanced by similarity, the opposite of otherness.

The Orwell of It All

Of course, westerners of Middle Eastern ancestry feel particularly discouraged, as the faces with which they identify, those faces that reflect their own, are implicitly disparaged once and again in those racist commentaries. Commentaries that go as far as to attack their rights as citizens, denying their Western-ness, their European-ness, echoing that Orwellian “we are all equal, just some more than others”.

For centuries, the foundations of the colonizing global economy were based on the idea that there were intrinsic differences to each culture and ethnicity, which would establish a natural quasi-divine order to the social structure, the job prospects and even the threshold of human suffering that each of us can expect in life.

The American writer Moustafa Bayoumi hits the nail on the head when he calls this behaviour “tribalism”. It is empathy yes, but not directed equally to the whole human race, and only towards those who share our likeness. In The Dark Sides of Empathy, author Dr. Fritz Breithaup writes that it has been questioned whether what we lacked in the past to avoid conflict and war wasn’t political will but empathy. The argument follows that if we were to feel enough empathy for others, then there would be no room for acts of aggression. But, Dr. Breithaup continues, empathy also encourages us to take a side in a disagreement, looking to reinforce our views and ignoring opposing arguments, empathy plays a role in confirmation bias and even enables herd mentality. These are cognitive patterns that coexist with behaviours of unbridled violence. Prior to violent acts from one group against another, it’s common to see an exaggerated rise of empathy for one’s own group, while increasing the perception of the other’s otherness. That is, there isn’t a total absence of empathy, but a magnification of restrictive empathy.

I understand that we all want to avoid violence and, in its place, we want to promote values that recognize and empathise with the humanity that exists in each and all of the world’s citizens. Like Mr Bayoumi expresses perfectly in a recent article for the British paper The Guardian: “If our sympathy is activated only for welcoming people who look like us or pray like us, then we are doomed to replicate the very sort of narrow, ignorant nationalism that war promotes in the first place”. If we help one another, we must do it because of our common humanity, and not because of the similarity of their skin, eyes, cars, clothes, religion… to our own. If we do that, we will continue to smear ourselves in tribalism, and we will deny the universality of the values of that vision of civilization that we profess to promote.

About the Author:
Xoán Miguel Castro is a photographer and long-time videographer who worked with CNN International. With a career spanning Europe, Latin America, and China, he has now resettled in his native Galicia in northwestern Spain.
The Spanish version of this article first appeared in La Voz de Galicia.