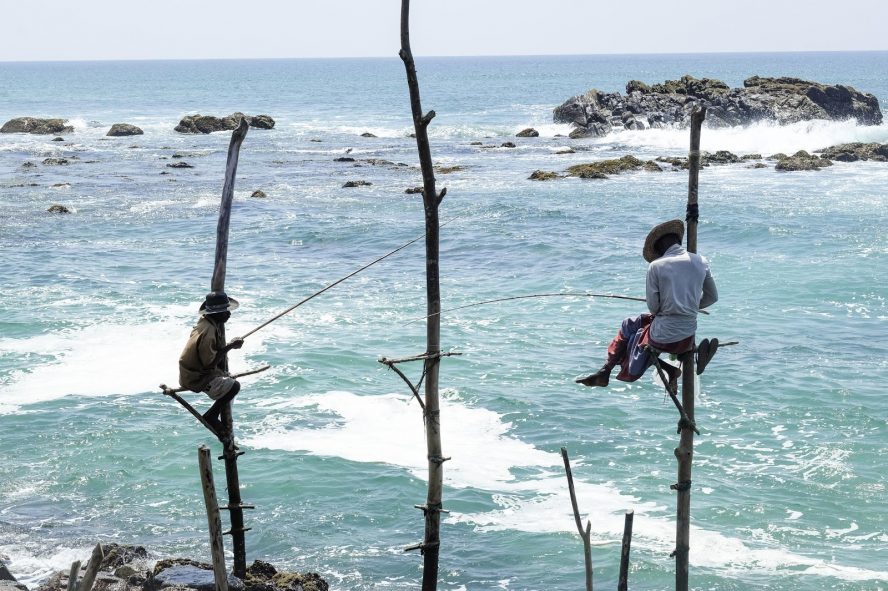 I live in a corporate world, surrounded by high-rises and traffic jams, unruly crowds and heaps of concrete.

Social media provides an escape from that – a means to finding inspiration and breathing spaces in other realities.

This is how Sri Lanka captivated me even before I got there. View of the Nine Arch bridge between Demodara and Ella train stations.  It was completed in 1921 – without any strengethening iron or concrete – and spans 91 metres at a height of 24 metres.  It’s one of the best examples of colonial-era engineering.  (Photo by Anton Ortigas)

There were so many stunning photos of the country online that I couldn’t wait to experience its richness and have it all pop out at me first-hand.

I was eager to capture such a wealth of history, culture, and landscape with my own lens.  So eager that I dragged my new bride to Sri Lanka for our honeymoon.

What we found there was so much more than we expected. Sri Lanka was bursting with color.

From the elephant sanctuary in Udawalawe – to the lush tea plantations in Ella.

The golden beaches of Mirissa, where time slipped by — to the colonial traces of Europe in Galle, where time stood still. Galle Fort was first built in 1588 by the Portuguese, then fortified by the Dutch in the 17th century.  It withstood the devastating Indian Ocean tsunami in 2004 which damaged  part of Galle’s coastal area. (Photo by Anton Ortigas).

There was such divinity in its numerous temples – and a striking roughness to the capital, Colombo.

We wove through it all by taking an unforgettable train ride through the country, crossing extraordinary manmade structures to revel at natural marvels. Another couple, sitting in the doorway of the train through Ella.  This is considered one of the most scenic train rides in the world, passing through old pine forests and foggy tea plantations. (Photo by Anton Ortigas).

As the train rocked and clattered over timeless tracks, you could hang your legs out the door for the entire journey. Nine Arch bridge. It’s said that the steel originally intended for the bridge was redirected by the British because World War 1 broke out.  Locals then built the bridge themselves using material they could find around them.  (Photo by Anton Ortigas).

Seeing the Nine Arch this way made me understand why people call it the Bridge in the Sky. Sigiriya Rock fortress.  The ancient city of Sirigiya is listed as a UNESCO World Heritage site. (Photo by Anton Ortigas).

Then, we reached Sigiriya Rock.  At two hundred metres high, it was a skyscraper unlike any other on the landscape. Tea samples.  Sri Lanka is the world’s fourth largest producer of tea.  It accounts for 2% of the country’s GDP.  The industry was introduced in 1867 by a British planter. (Photo by Anton Ortigas).

We also visited farms and saw how produce was sorted and packaged.  It reminded me that all things come from somewhere – and go through multiple processes that we as the end consumer may forget to appreciate.

They put a lot of hard work and passion into their end-products – reminding me to savor the littlest things. Washing at the temple. (Photo by Anton Ortigas).

From the littlest things – to the most profound.

We were there during a religious festival at the Buddhist Temple of the Tooth in Kandy.  I felt blessed witnessing their faithful devotion, which exhibited but a fraction of their rich culture. Offerings at the Temple of the Tooth, Kandy. A sacred relic of Buddha’s tooth is here.  It holds both religious and political significance.  Devotees believe whomever has the relic holds governance over the country.  Kandy was the last capital of Sri Lanka’s kings and World Heritage site because of the temple. (Photo by Anton Ortigas).

But more than cultural expressions, it was the personal ones that I found most enthralling.  There were such nuances in people’s countenance and manner – a charming playfulness and joy in their eyes. From the moment we arrived at the airport in Colombo, we were greeted by radiant smiles.  Their warmth reached out and touched you – I hadn’t expected that at all.

At one point, we had to select a tour guide from three men before us – we went with the one whose smile was the warmest and most comforting.

Following our instinct proved to be the right choice. He was determined to give us visitors the best experience of his country possible, something to remember. He introduced himself as Mr. Tilak – and after fifteen years of being a guide, he spoke English better than most.

Mr. Tilak was an outdoors man and smelled like the sun. He wore the radiance of the day like a king’s robe.

He took his time explaining the history of things – and he led us down unpaved paths less travelled to show us less ordinary things.

Such as the ancient King’s Seat which had been overrun by grass.

I wanted to take his photo there – but he told me to wait because he knew a “perfect spot” closer to the top of the hike.

So, I waited – and took his portrait at the spot he recommended.  He tried three different poses – at his behest – before I clicked my camera. Descending Sigiriya ‘Lion Rock’.  An ancient king built a gateway in the shape of a lion halfway up the 200m rock – his palace was at the top.  After his death, the palace was abadoned and the site was used as a Buddhist monastery until the 14th century.  (Photo by Anton Ortigas).

Mr. Tilak made the treacherous climb seem easier than it was. He made a difficult trek more fun.

This was a man who clearly enjoyed what he did. He loved his country and was proud to shared it with visitors. Tea farmers. Over a million people in Sri Lanka are employed – directly or indirectly – by tea production. (Photo by A. Ortigas).

Being in the corporate world, I sometimes feel like I am part of the proverbial rat race – it’s always a competition to be the best, to do the best, and have the best.

Experiencing the different workers in Sri Lanka – from the woodcarvers, the fishermen, the coconut vendors and Mr. Tilak – two things resonated the most: their sense of gratitude and contentment.

It felt like in the simplicity of their lives, they were being the best of themselves.

Seeing this brought me back to myself. It grounded me and reminded me to breathe. To pause and see how great life is. To release anxieties because eventually, we will get to where we want to be. Mirissa beach.  Laid back and relaxed.  (Photo by Anton Ortigas).

My experience of Sri Lanka’s diversity reminded that in the end – no matter what religion, if any, we believe in – we are all human beings participating in the same race – and no matter what part of society we occupy or belong to, it is our attitude and outlook that matter.

To be kind and loving is what makes all the difference.

About the Author:
Antón Ortigas is an entrepreneur who has turned what started out as a hobby into a way of life.  He explores the world looking to capture its simple profundity in magical images.