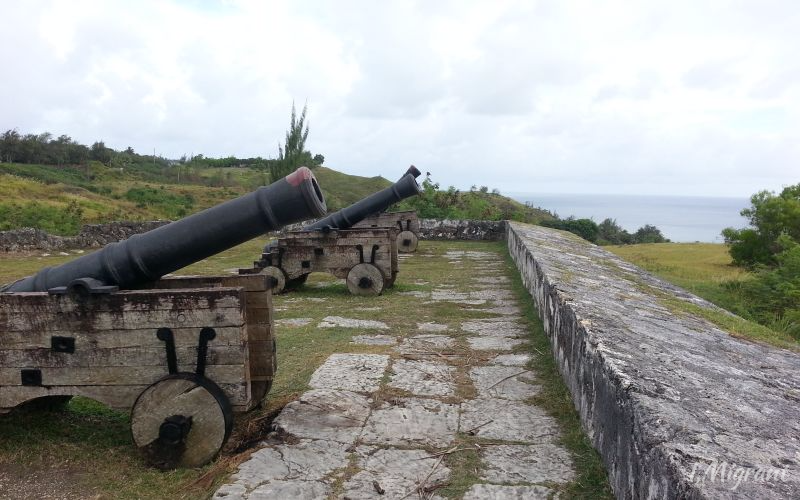 The trek through the forest was not an easy one.  It was hot, and humid; rocky, and steep.  The terrain, though beautiful, was punishing to say the least.

Victoria-Lola Leon Guerrero knew the path by heart.  She cut easily through the foliage, determined to show us the latte stone remains of the ancient Pågat Village.  Her ancestors, Guam’s indigenous Chamorro people, have been on the island for over 4,000 years, and this was sacred land. Victoria-Lola Leon Guerrero prepares to honour the spirits of her Chamorro ancestors.  She asks them for strength and guidance.  Pågat, Guam.

“We have a belief ,” she said, softly, “that when we are in spaces like this, you are in the presence of the spirits of our ancestors.  Therefore, we are to be quiet and respectful.”

Her mellow voice suddenly took on a desparing tone: “imagining guns being fired here, and turning this place into a firing range is very culturally disrespectful.  It’s disrespectful on so many levels.”

The U.S. military, which occupies a third of Guam, had plans to use Pågat for military exercises.

And Leon Guerrero wasn’t the only Guamanian feeling like the U.S. has been disrespecting them for years. Fort Soledad. One of 4 Spanish fortifications built around Umatac Bay.  It’s atop a steep bluff called Chalan Aniti, or Path of the Ancestors.  The bay was an important supply station for trade ships crossing the Pacific during Spanish rule.

Guam, or Guåhan as it’s known in Chamorro, sits on the edge of the Western Pacific — where America meets Asia.  It’s small – only 544 square kilometres, and has less than 200,000 people.   Of that, thirty-seven percent are native Chamorro, the biggest ethnic group.

The island is closer to North Korea and the troubled South China sea than it is to Washington D.C.  But this is what makes it strategically vital to the United States, which has ‘owned’ Guam since it was ceded by Spain in 1898.

The U.S. maintains two large military bases on the island, the launch-pad of its power in Asia.

Guamanians will often remind you that their home is more than just a U.S. military base, but they’re up against many others who see it as nothing more than the world’s biggest air-craft carrier.  There are over 6,000 U.S. troops here, and the U.S. military is the island’s main source of income. Guam sees 1.5 million visitors a year; tourism is the second source of revenue for the island after the U.S. military.

For many tourists, Guam has the “feel” of 1960s Hawaii: beautiful beaches, crystal blue waters, rugged mountains, and an odd ambiance that’s very much “tropical”-mid-20th-century-small-town-America.  There are the quintessential strip malls, wholesale warehouses, Catholic churches, and Spanish forts.

Driving around the island also reveals the many Asian cultures that intersect here.  Chinese restaurants, Korean bars, Japanese stores.  And everywhere you look, there are a great number of Filipinos intermingling with the Chamorro.

The predominant language is English.  The currency is the U.S. dollar.  Residents are U.S. citizens, and they can sign up for military service.

But Guam isn’t a U.S. state, which means its people can’t vote for president, and they don’t have a proper representative in the U.S. Congress.

“We are a colony,” said Robert Underwood, the president of the University of Guam, and a former delegate to Capitol Hill.  “We are ‘property’, not ‘part’ of the Unites States.”  They carry the burdens, but not the full benefits.

Speaking on international television, Underwood said that Guam’s exceptional political status and its inability to determine its own future is a “grievous historical injustice.”

There has been a growing clamour for self-determination.  People like Leon Guerrero have been working to revive in fellow Chamorros a pride in their non-American past.  They’re calling for independence.

Many Guamanians are not happy that by virtue of their “unique” relationship with the U.S., they are on the frontline against any aggression from potential enemies in Asia.   Most recently, a threat from North Korea to send missiles off Guam’s coast in retailation for U.S.-backed U.N. sanctions.

Pyongyang has threatend them before,  but, speaking to local media, 64-year-old Maria Teehan said it’s the first time she’s concerned about the rhetoric in reply from mainland U.S.A.  From a new president she couldn’t vote for, or against.

“When he (Pres. Trump) fought back with the same language as North Korea, I did not feel safe,” Teehan shook her head in dismay.

She’s upset that her island home is being used as a pawn, trapped in the crosshairs of a potential international nuclear conflict. Guam saw active combat and suffered many atrocities during World War 2 when the island was occupied by the Japanese military. The memories of that war still haunt the island.

But not all Guamanians are afraid.  Many say they have faith in God, and the United States.  Believing the massive arsenal that sits on their shores will defend them from anything hurled their way by any enemy.  Never mind that they might only have that enemy because Guam is U.S. territory.

Leon Guerrero believes it’s time for change: “we’ve always been caught in the middle of other people’s wars – and we’ve died and we’ve suffered from that.  Learning from the past and looking towards the future, that’s not a wise choice of ours to continue to be a target.”  Guam, she said, should move towards a more peaceful means of income and become an economic hub instead of a military one. The native Chamorro welcome reverberates through every curve of this lush, green, Micronesian island.  Regardless of the nuances of her atypical existence.

It greets you the moment you step out of her ports, and it’s warmly offered, with a smile, by every Guamanian you meet.

At first, it sounds like you’re being told you have ‘half-a-day‘, and you’re not quite sure if that’s a warning, or a promise.

There’s an unsteady rhythm now to the superficially idyllic tropical life on Guam.  The constant rumble of looming war battles increasingly with the heartbeat of its people, as they listen for the call of their ancestors.