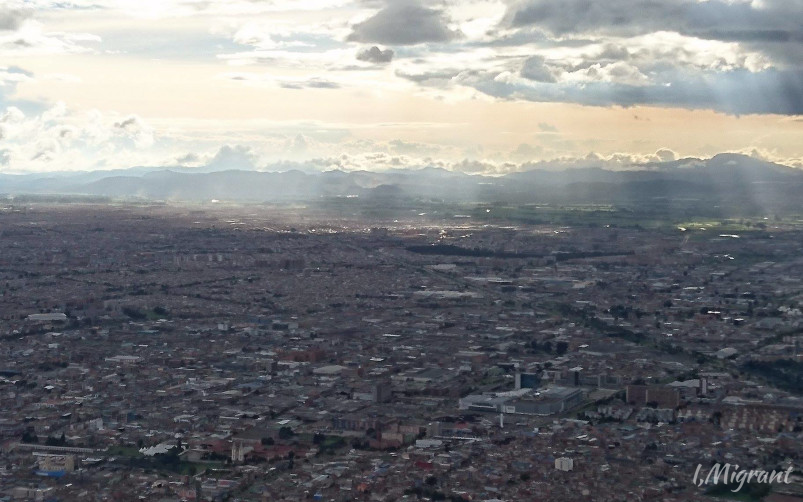 He blended into the crowd quite effortlessly. Not too tall, not too big. Not too loud, and not at all brash. It was easy to see how he might slip by unnoticed.

“How stereotypical of me, right?” he chuckled as he ordered his first espresso of the day.  “Juan Valdez and all that,” he smiled, charmingly conspiratorial.

And in this particular coffee shop, he’s a long way from home. Coffee growing is a large part of Colombia’s national identity.  The country of nearly 48 million people produces more than 11 million bags of coffee a year, the 3rd highest in the world after Brazil and Vietnam.  Its unique sustainable farming traditions have earned the country’s coffee-growing areas a spot on UNESCO’s World Heritage list.

Genesis: The Town Between

“I grew up under the shadow of Christ the Redeemer,” Sami began, “a less famous one,” he clarified jovially, referencing the renowned landmark in Brazil.

“One statue among many,” he went on, “in a small town in a valley surrounded by mountains.”

“It was very beautiful,” Sami said, wisfully, “and very civilised.”

His coffee-coloured eyes clouded over with memories.

“Back then, before mobile phones and all that, we guided ourselves by the terrain and the statues.”

He reached for a piece of paper and exuberantly drew me a map. His coffee lay beside him, ignored.

“The mountains in the west—the Christ over to the north—and the Three Crosses on this hill. Here, there were mango trees.”

After nearly a decade away, Sami was transported back.

“Like everywhere else in Colombia,” he started again, “I suppose you could say the topography formed our culture: we wanted things easy, and we wanted them fast,” he explained, with a nostaligic, melancholy smile. “We were valley people; we weren’t built to work hard like those in the mountains.”

Sami was trying to explain why it was inevitable that Cali, his home town, would become a vital avenue for narco-trafficking.

A valley, as he put it, trapped between leftist guerrillas and the drug cartels. Medellín is Colombia’s 2nd largest city, with a population of 2.5 million.  For decades, it was known as the drug capital of the world.  Colombians are ethnically diverse; that, coupled with the country’s imposing and varied landscape, has resulted in the development of very strong regional identities.

The Parables of a Kaleidoscope World

“I was raised in a city of appearances,” Sami stated, matter-of-fact.

“A city of envy. Of who-had-more. Of hunger—and balls. Of humiliation, and not being left behind.  A place of corruption. Where you could learn bad things.”

He enumerated complex characteristics as if recalling a grocery list.

There was no rancour in his voice.

“You learned to do whatever it took to get to where you wanted to be, regardless of who you hurt along the way,” he explained.

“There was no friendship. The women, the cars, the parties, the luxury homes—your social ‘status’—fictional.”

His memories seemed to tumble over each other to get out.

“The bigger and bolder your labels and brand names, the grander your reputation. It was like a movie. You see people having all this wealth and enjoying these seemingly lavish lives—and you want to be part of that. I mean, my family, we were comfortable, but nothing like that. There were limited options for guys like me.”

There was a momentary silence before Sami carried on.

“My family taught me to do good. I went to a Jesuit school, and we were Catholics like everyone else. But in Cali, morality is two-faced.” A former Spanish colony, Colombia removed any official religious denomination from its Constitution in 1991.  More than 80% of Colombians, however, remain at least nominally Catholic, and the Church is still seen as traditional social and moral arbiter.  (Photo: Rafael Pieroni.)

Sami said he learned early on that he had to wear a metaphorical mask to survive. To not “live in fear” like everyone else did. So, at home, he was the the sweet, dutiful son, but beyond its walls—he had to play the callous, bad boy.

“Those two sides had to work together within me. Like yin and yang. You might not approve of certain things—but what other choice was there?”

Cali was over 400 kilometres from Medellín, a notorious narcotics hub from the 1970s through the 1990s.

The Medellín Cartel, under the infamous drug lord Pablo Escobar, was known for its ruthlessness, its acts of terrorism and violence. At its height, the cartel reportedly moved 15 tons of cocaine a day. And it had a reputation for killing anyone who stood in its way.

A rival cartel ran things in Cali. Its original leaders, subtler but no less brutal than Escobar, were known as “The Gentlemen”.

The Gentlemen began their criminal career as kidnappers before getting into drug trafficking. By the mid-1990s, they were reportedly responsible for 80% of the world’s cocaine trade. They moved hundreds of tons of it, and laundered billions in profit by investing in legitimate businesses.

Organised crime didn’t end when the top Gentlemen were captured in 1995. Smaller, more specialised, cartels formed to fill the void, operating in a ‘federalised’ manner. After all, there was still tons of money to be made. Guns were power, and life was cheap. It’s just the way things were.

In Colombia, as in many other places, the criminal cartels ruled. Bogota, Colombia.  The Colombian goverment has called the cartels the country’s “worst evil”.  Despite the fall of Escobar and his ilk, there’s also been a spike in coca cultivation in recent years, and Colombia remains the world’s top cocaine producer.  The trade is so deeply entrenched in the local economy that even the guerillas got involved.  (Photo: Rafael Pieroni.)

The eldest of two boys, Sami felt he had to take responsibility for the family after his father left. He was 14, and started selling his mother’s home-made sandwiches in school. The sandwiches—or ‘samwiches’ as it sounded when pronounced—became a big hit.  ‘Sami del Samwich‘ was born.

The success of Sami’s homemade trade eventually grew beyond the confines of his school.

Soon, he and his mother set up a small samwich stand. The young boys in the illegal drug trade drove by regularly for pick-ups. Sami said he had to ‘be friendly’ with them as they quickly became his biggest customers.

Sami’s samwich stand went on to become a full-blown restaurant.

One day, the ‘drug boys’ ordered food for delivery. Sami brought it to them himself and ended up staying at their party over-night.

“They wouldn’t let me leave. I saw things there — ,” he shook his head. “Maybe not good to say in polite company,” he demured.

Sami took a sip of his coffee. I asked again.

“Cocaine. Guns. Women. You get the picture.”

You get the picture. You don’t say no to the cartel.

“The best and the brightest worked for them,” Sami expounded. “The money’s better, and the connections would be in your favour. It was power.”

Sami recounted a party where naked women were made to run as if they were prey in a fox hunt. A dog was set loose after them. Whomever was caught by the dog would have to have sex with the “jefe” that night.

When asked how ‘involved’ he got with the cartels, Sami replied:

“Oh! You needed balls to go big time—to kill—” he paused again “—I didn’t quite have those.” So, without the proverbial balls, how did Sami stay on the cartels’ good side?

“I made it a point to be seen as neutral, and that saved me many, many times,” he shared.

“You had to be smart, and polite. Be their friend, more than their enemy. I was a politician,” he explained. “I still am.”

It was easy to see how the cartels would think him ‘harmless’—he’s amiable, and inoffensive.

“As I said, I wore a mask. A mask of transparency, of openness. You can’t look like a man who has secrets.” He smiled, and there was an undeniable twinkle in his eyes.

“It was all about trust,” Sami reiterated. “I had to make them trust me.”

That included once helping them organise cross-country drug mules.

“It’s like this: they cut off the fingers from rubber gloves and filled those with cocaine. Then, that’s compressed so it’s tiny tiny tiny. Like a grape. Then, you swallow. As many as possible. If not easy, you put it in oatmeal to help it go down. Not me—the two mules I got. Each was given $50,000 U.S. dollars.  One swallowed 80, the other managed 120. Then, you put them on a plane. They always go well-dressed. You’re less likely to be stopped at the airport if you’re well-dressed. But there’s always a guard and other people at the ports who are on the payroll. They make sure everything goes to plan. I was shitting myself the entire time. I can’t believe I put those two people in such danger. I didn’t even know if they’d made it to their destination until much much later. The trouble wasn’t worth it. It was not something I could be part of again.”

Fortunately for Sami, the ‘drug boys’ didn’t have a problem with his decision. It’s not like they were in desperate need for mules anway.

“Back then, there seemed to be more people involved in drug smuggling than not,” Sami expressed. “Nuns, football players—even army vehicles were used to transport drugs. It was that—involved. Dreams were fuelled by drugs, and built on cocaine. Money flowed like a river, and as quickly as it came, it went. So it kept you on the cycle.”

Sami lost many friends in Cali, and there were others, he said, who tried to come after him.

He remembered it all with such clarity—living life staring down the barrel of a gun.

“Truth was in the roll of the dice—you either believe it or you don’t. It was a gamble. You never knew who was telling the ‘truth’. Truth was unimportant.”

Sami stopped speaking as the voices in the next table rose. They were loud and garish.

“Conversations are so superficial here sometimes,” he whispered. “They think they know the real world, what do they know from their golden cradles and crystal houses?”

But the world in Cali wasn’t one Sami could be around much longer. Emigration from Colombia is one of the largest in volume in Hispanic America. Most have left due to economic, social and security issues linked to the armed conflict. But Colombia also hosts the world’s highest number of internally displaced people—7.3 million, more than 15% of the population. (Source: Migration Policy Institute) (Photo: Rafael Pieroni.)