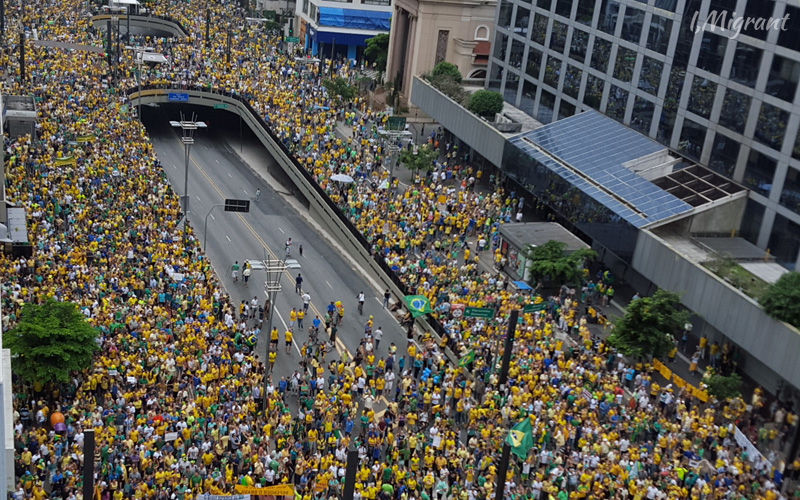 It hasn’t been raining more than ten minutes when streets begin to flood.
Thick and murky, it falls in corrugated sheets.

Nothing but grey.  And brown.  And more grey. At Angelica’s house, there’s a splash of red against a wall.  She sits in front of it every day teaching her children things they would normally be learning at school. They’re calling him a liar now. Lula. The former president. Once revered as the champion of the masses for lifting millions out of poverty.  Now, feeling betrayed, they want him behind bars.  He’s supposedly benefited from corrupt practices at Petrobras.

“They think we are fools,” Assis says angrily.

Hopeful but uneducated, Assis came to Rio de Janeiro years ago to find work. He now speaks five languages and is a server in a high-class establishment.  Married, and owns a house.

“Paying taxes here is a joke,” he says.  “Where does it go? We see no social services…”

His mother-in-law was sick, and received no treatment for months.  She was bumped off a transplant list by someone with more money.

A flash of light cuts through the grey.  The boom of thunder comes moments later. More than three million people across Brazil come out to protest against corruption.  A sea of green and yellow.  And black.

They want the president out.  They hold her responsible.  Not necessarily because she’s done something wrong – she insists she hasn’t – but because, as far as the protesters are concerned, she’s done nothing right.

Not improve the economy, (it’s only been getting worse); not clean up corruption, (the can of worms the investigation into Petrobras has opened is like a circus car from which an endless line of clowns seems to come out); and not even, at the very least – they say – look sympathetic.

Many spit out her name with disdain – as if it were bitter in their mouths.  Dilma.

In the north, doctors in white struggle to deal with the aftermath of a mosquito bite.

At least, they think it’s a mosquito bite.  They’re still not sure.  No one is.  Not even the World Health Organization.

All they know is that there’s been an outbreak of Zika — and since then, more babies have been born with malformations and neurological disorders.

They’re doing all they can – but they need more help.

The head of the state says the federal government is letting them down.

They’re not the only ones feeling let down. A horse and a mule.

In slivers of blue dashing through Rio’s traffic, Giulia is crammed in with Marta and thousands of other commuters.  It’s Rio’s new ‘rapid transport system’.  Dedicated buses that run up and down an express lane the way a train might.  Had the city opted to build a track.

This was set up in time for the Olympics — just one of the solutions to help ease an already over-burdened mass transport system.

But people here see them as short-term answers to a long-standing problem.

“They do this all the time,” Xavier says. “Take short-cuts, and then hope for the best.  So far, it’s worked and we’ve always managed to pull through…”

He shakes his head in resignation. Rio de Janeiro. A sculpture of legendary Brazilian musician Antonio Carlos Jobim, the force behind the bossa nova.  His “Waters of March” is noted as one of the greatest Brazilian songs of all time.

When the sun is out, the beaches are full.  It’s the only thing everyone has access to, they say, and it doesn’t cost money.

But even on the beaches, the class divide is evident.  Those that have “more” dominate certain areas, and those with “less” occupy others.   That division usually intersects with race and ethnicity.  Which here – are defined by colour.  You are either white, brown, black, or yellow.

It’s the Whites, they say, that don’t support Lula and Dilma.

The end of the road.

The darkness is shattered by a hundred rivers of light.  It’s the most brilliant of evenings.  The sky is alive and though cracked open, there is no rain.

Dry thunderstorms are not rare here.  And winter is coming. Brazil gets its heaviest rain in March, but rain is the same the world over.

Water falls in drops that then become cascades.
A storm is a storm.

The differences lie in the damages caused, and how one recovers afterwards.

*an earlier version was first published on Al Jazeera English.