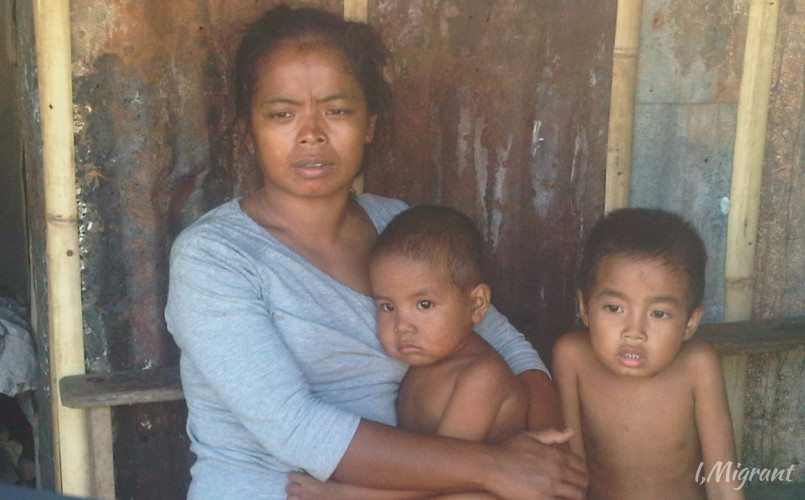 They call them “bakwits”.  Thousands of displaced, transient, residents in the Southern Philippines with no permanent place to call home.

Caught in the cross-fire, bakwits have spent decades fleeing from fighting between Muslim separatists and government forces.  At least that’s the underlying scenario.  Peace talks began between the two parties over a decade ago, and there has been a ceasefire in place for years.  But there have been sporadic breaks, and exchanges of gunfire, when frustrations ran higher than the desire to put down their weapons.

There are now, also, all sorts of other armed groups waging their own battles in the already war-weary area.

And so – bakwits.  It’s almost become a derogatory term.

“As if it’s our fault!” Bitun, (not the ‘bakwit’ mother pictured above), told us in a recent interview.  “Don’t they see we had no choice?”  Her own frustration and sadness clear in her voice.

Bakwits like Bitun have been on the run for so long that in many areas it is perceived they stay ‘mobile’ on purpose.  That they don’t look for permanent resettlements so they can keep living on hand-outs from the government and aid agencies.  Many people seem to think that it is much easier, after all, for bakwits to get a free meal than to return to the poverty that has long kept them transient, and in chains.

“This is not the life I wanted for my children…”

Bitun has three of them.  Children who, like their parents did, are now growing up without a concept of home.

“My husband was a fisherman, and I tended the farm,” she recalls.  “But we can do neither anymore…”

Bitun and her family had to leave their last “home” 2 years ago when fighting broke out again after peace talks collapsed… again.

“Double-body, 105, 105-5, bazooka, 81s…,” she rattled off ammunition as if reciting a grocery list.  She can identify them all by the sounds they make, she told us.  So can her children.  It is the soundtrack of their lives.

“The first story I remember being told,” Bitun confided, “was how as a baby, my first cradle was a blanket slung between trees because we had no house…”

She’s been on the move ever since.

A vllager goes through remains of his house the morning after it was damaged in an armed conflict between two rebel groups in the Southern Philippines.

Bitun and her family live in Maguindanao.  Battleground of one of the longest insurgencies in the world.  Muslim separatists have been fighting for an autonomous region for some 40 years now.  They were granted an area in 1997 – but a breakaway group decided it wasn’t enough.  And so the government had to begin a new round of talks, with a whole new group.  Should these talks succeed, there’s no guarantee that yet another dissatisfied breakaway group won’t form to challenge the newly-structured peace.

There are already separatists who say they disagree with how their leaders are handling negotiations.

“I tried to vote,” Bitun told us, referring to the general elections a few months ago.  Like the rest of the country, she was filled with hope and eager to effect change by casting her ballot: “but when I got to the polling station, someone had apparently already voted in my place!”

It’s a long-used method of election-rigging in the Philippines – unscrupulous politicians faking voter IDs and sending people in their employ out to cast false ballots in their favour.  It would have been an easy way to get past the security measures of the newly automated election system… put in place precisely to curb any manipulation of the process.

“I wasn’t even allowed the freedom to vote,” Bitun repeated.  And that seemed to be the last straw.  As far as she was concerned, there was no hope left to hold on to.

All she had was her bakwit existence.  Feeling powerless, and insignificant.  Unwelcome, and afraid.

“We get it from all sides,” she continued, enumerating a number of anomalies as if reciting yet another inescapable list.

“We’ve seen men who work for local officials claim to be evacuees so they can take our food in distribution lines.  They later sell it in the markets.  Members of host communities do the same thing to feed their families.   We’ve had to return to our farms to harvest what we can to feed ourselves…only to then have soldiers take the crop away from us.”

Her desperation was almost tangible.  But so was her resignation to a paralysed life.

This woman without a home chose to go before our camera without a face.  Afraid that what she had to say would make her powerful enemies.  And in the lawless province of her birth, she was certain someone wouldn’t think twice about playing her the tune she already had ingrained in her soul: double-body, 105, 105-5, bazooka, 81s…

“But someone has to speak for us,” she said emphatically.  “Someone has to talk about what our lives are really like.”

All this faceless woman wanted to do was shed some light on the darkness that engulfed her.

*An earlier version was first published by Al Jazeera English.