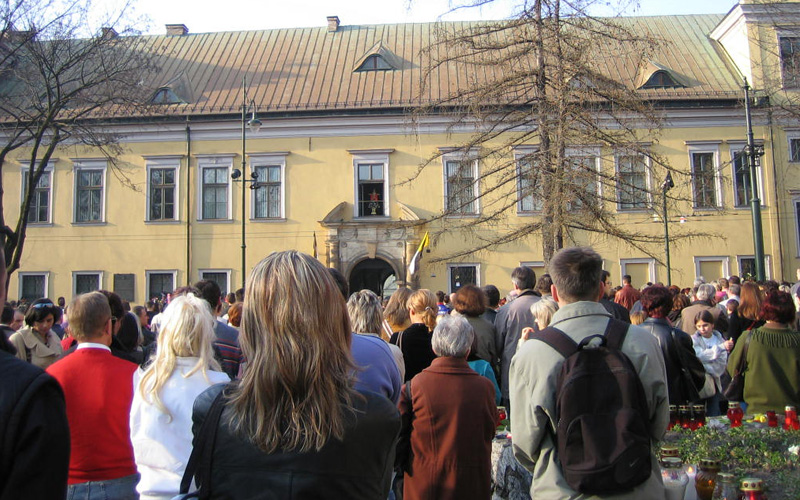 “Into the clockwork universe the quantum child. Why doesn’t every mother believe her child can change the world? The child can. This is the joke. Here we are still looking for a saviour and hundreds are being born every second. Look at it, this tiny capsule of new life, indifferent to your prejudices, your miseries, unmindful of the world already made. Make it again? They could if we let them, but we make sure they grow up just like us, fearful like us. Don’t let them know the potential that they are. Don’t let them hear the grass singing. Let them live and die (here), tick-tock, the last breath.”
– Jeannette Winterson

It is a small room, just as Jacek said.  So small I am surprised I can breathe at all.

I didn’t believe him at first.  He has a penchant for grandiosity after all, making ‘grand’ conclusive statements as if he himself were Pope.  So, when he told me that this man – Karol Wojtyla’s friend – had a “very small apartment,” I didn’t believe him.

But, he was right.  It is small.  I have barely a foot open at each side.  Surrounded by suffocating walls. Each wall upholstered in half-a-century’s old mustard faux-velvet, with a pattern of burgundy spatter.  It is claustrophobic, and yet – not.  It is musty, and yet… clean.  Ragged old furniture is scattered haphazardly around the tiny flat.  Fading postcards and framed old photographs are plastered on the walls.  All dated pre-World War 2.  In black and white.  In sepia.  People looking very glamourous and beautiful.  “Glamourous and beautiful” – seems like a whole different lifetime.

To my left – a short, narrow doorway leading into a room cluttered with books.  Books on the wall.  Books piled high on the carpeted floor.

Behind me, another cramped room.  A study.  Its centrepiece is a sleek, black laptop hooked by ISDN into the world-wide web.  The incongruity of the scene is striking. Like a poorly-planned Hollywood B-movie with bad continuity.

A grey-haired, stooped, portly old woman is sitting on a foot stool by the stove in a narrow kitchen that is wreaking of garlic.  Her foot is in a plaster, and she is eating a banana.  Behind her – a clean, sharp, window pane.  Just beyond it you can see beautiful slow sloping hills dotted with 1970s grey tenement housing.  Ugly, flat clumps of concrete that look as bleak as the era they are a constant reminder of.  The sun is shining, and in the distance, quaint white houses with dull red rooftops look like icicles frosting a crisp winter scene. It has a gauzy, dream-like quality to it.  It is ‘in the distance’… far away from the reality in this cramped tenement flat.

Here… here, there is the musty, stale smell of Old Europe.  Like a grandmother’s antique oak chest that is never opened.  Never aired.

It is too cold to crack a window open today.  The walls are upholstered in mouldy mustard, and the floorboards are worn and creaking.

Jacek has gone into the study to tap on his mobile phone.

From behind a heavy, brown, velvet curtain to my right comes the low voice of a short, soft, old man. Kind-faced, and wide-eyed.  Not unlike his famous friend, Karol, the pope.  The pope that was.  The late John Paul the Second.

He is talking about poetry, Karol’s friend.  About the grandeur of God, and the loneliness and silence of Nature.

He is in mourning.  His friend, the pope, has just died.

The room suddenly seems to shrink.
Time is closing in.  Life is getting smaller.  What a circle.  What a Plan.

The pope has died, and I am back in Krakow.
It’s been ten years and the landscape of my life is like that scene outside the window…
a distant dream.  Wintry and crisp.  It is a frosted scene, and yet – sharp and real.