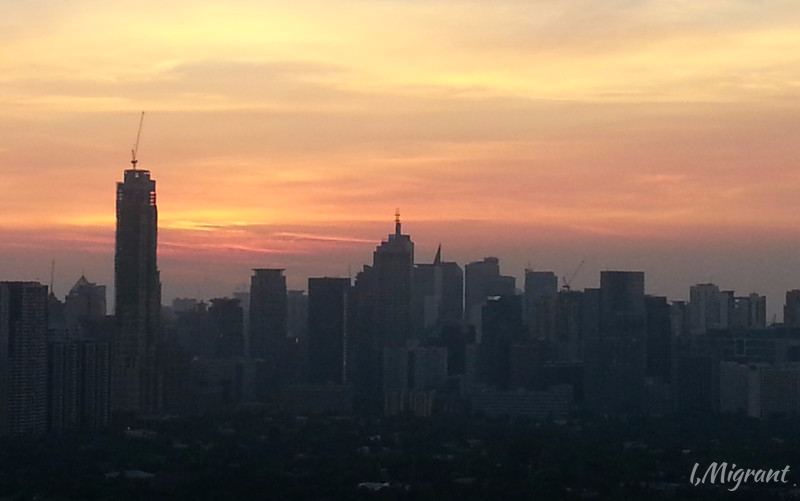 Samuél Vásquez Martín checked his watch.  It got dark earlier than expected as storm clouds loomed where the sunset should’ve been.

Someone started tapping frantically on the window next to us.

“Ah!” Sami exclaimed, recognising the tapper.  “Excuse me,” he stood to head out and meet the interloper.

In the span of our conversation, Sami had been greeted by and seemed to know half the people who had come in and out of the café.  A café he hadn’t been to before, mind you.

“I’m sorry,” he said upon his return.  “His sister is a friend of a guy I once did business with.  I met them through their in-laws.  Havcn’t seen him in a while.  Good guy.”  Sami smiled, retaking his seat.

“This is my home now,” he said, scanning the room while playing with the red thread bracelet wrapped around his wrist.  “People are nice.”

He waved a server over for some water.

“This place is safe compared to where I am from,” he stated.

We were in a café in the Philippines as the government waged a violent campaign against drugs.  More than seven thousand people had been killed in the president’s first year in office.

Maybe because here, he didn’t feel like he had to participate in the culture of violence?

“My friends here are…ah, better people.  They aren’t members of a cartel.  Or drug lords.”  He confessed, relieved.

Here, he could breathe.

Peace, it seems, can be relative. Sami and Grace were now married and thinking of starting a family.  They both had corporate jobs that kept them comfortable.

“But you cannot get too comfortable, you know?  This is how one dies,” Sami stated.  “You have to be… hungry.”

He was already planning his next business venture.

“If you are not suffering, you get too soft.  I don’t want to be too soft.  There is still so much I want to do.”

There is still so much he felt he had to do before returning to Colombia. Cartagena in northern Colombia is a UNESCO World Heritage Site.  In many ways, this Old Town of cobble-stone streets, colonial balconies, and churches encasulates a nostalgic, romaticised image of the country.  A place where extended family ties and ritual kinship remain strong, and influence all aspects of life including politics and business.

“When we return, we have to return BIG,” Sami said, matter-of-factly.

He looked down and slowly swirled his empty coffee cup.

“We have to be able to treat the whole family,” he shared.  “You can’t come back unles you have something for everyone.  It is the culture.  If you can’t do that, don’t come back.  Because you have not succeeded, and you do not want to bring shame to your family that way.”

He put the cup down and explained further: “it’s like if I were a hunter.  If I left the house to hunt, you can’t return unless you have caught something enough to feed the whole family.”

“Have I explained myself well?” he asked.  It is a politeness he learned growing up, he said.  To ask the listeners not whether they understood him, but if he had expressed himself well enough to be understood.  “This tells you who we are.”

It was evident how much social graces and treating another person with respect mattered to Sami.

As far as he was concerned, politeness is key.  Towards everyone.

Why was Sami sharing his “bible” now?

“Because it’s good to look back and see how far you’ve come,” he said, “to realise the choices made, the experiences that made you stronger, and be grateful for now.  Now, and the future still to come.  To share the wisdom, and pass on the lessons learned.”

Sami didn’t talk about his past much but the relief of now doing so shone like a light on his soul.

“It’s amazing how my life has changed from making sandwiches, and from the cartels.”

There was an inherent freedom in his language.

“Because we are walkers.  We are story-tellers.  We are history,” he expounded.  “And the world has been doing this since ancient times — passing on legacies as an example for the next generations.  To understand everyday the different faces of the world.  And to confirm that the moon is not made of cheese.”

Sami apologised for his “tendency to wax poetic.”

“We need to show people the worlds that differ from the ones they live in, and the ones that we never imagine exist.”

Because they do exist.  The darkness.  The fear.  The demons that are self-created, or otherwise.  The deep underbelly of ugliness that we try to push away, or deny, or hide behind locked doors.

They exist, and they can take over.

Sami confessed that he didn’t want his children to go through what he did, but “I want them to know who I am.”

Isn’t that something everyone wants?  To be seen?

To be seen as they are.

Sami checked his watch again.  It was nearly time for him to start his shift at the office.  He worked nights – but not for much longer.  He was lining up a new job.

A group of young people laughing hurried into the café, their flip-flops slapping noisly against the tiles.

It was hard not to notice.

“No one wears slippers in Colombia,” Sami said.  “That would make it very difficult to run, or fight,” he whispered.  “How do you fight in flipflops?  You need things to hold fast to your feet.”

“But at the same time, I couldn’t walk around wearing anything precious in Colombia without constantly checking behind me.  And in China, during fireworks – my Latin friends and I threw ourselves on the ground because we thought we were being shot.  That was our instinct.  Can you imagine?  How stressful.  That’s no way to live.”

The leaders of the initial drug cartels in Colombia have been taken down, but this didn’t put a stop to narco-trafficking.

“The drug problem will never end,” Sami mused.  “Too many people make their living off it.  From the U.S. to Patagonia, there are distribution channels.  People who earn their keep off it — entire families.  It’s like a living organism.  It metastasises, it adapts, and it will grow.”

Colombia is now the world’s top producer of cocaine.

In the last few years, more of its land has been given over to coca cultivation than ever before.  Much of that land overlapped with areas under rebel control.  Though a peace deal has been signed with the largest guerrila group, the Colombian government is also pushing for social and economic reforms, not just at home but on the world stage, to “deal with the roots” of the drug issue.

Juan Martin Santos, Colombia’s president, has said it is ultimately a human problem in need of “a human solution.”

Sami checked the time again on his fake luxury wristwatch.  Out of habit, he then went on to play with the red Chinese bracelet next to it.

It was time to go.

He stood to say goodbye, and gave himself one last pat down before walking out into the over-cast evening.

It was about to rain.

In the silvery light of the gun-metal dusk, you could just make out his silhouette —  freshly ironed shirt tucked into crisp clean jeans, a leather belt cinched comfortably around his waist, neatly trimmed beard framing his jovial face, and a big, big, big smile.

He was anything but common.