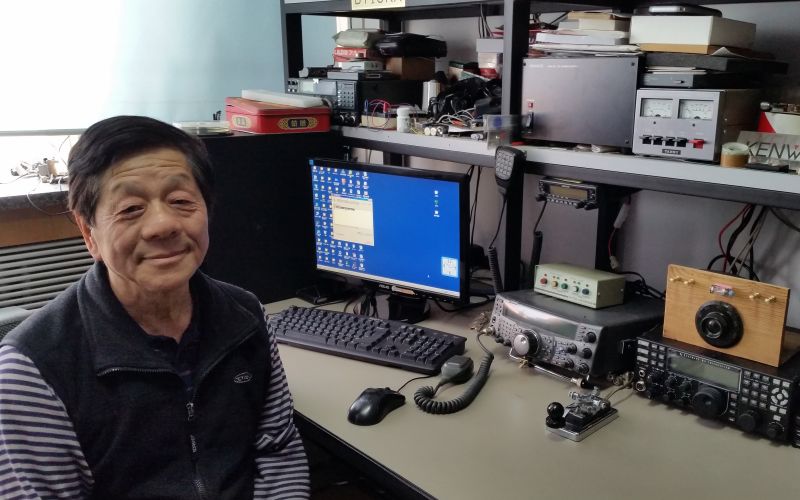 His kingdom was tucked away in a tall building on a small, side street off a busy Beijing avenue.
Down a long, narrow corridor made even narrower by old radio equipment lining the walls.  It was a small room.  Again, made even smaller by all the radio equipment collected in it.  Cables.  Boxes.  Old antennae.  Ordered chaos.  Pennants from amateur radio clubs in different countries were neatly tacked on the walls.  He read the names off with pride: “Macau”, “Germany”, “Finland”, “Philippines”, — “and look at this one from Israel!”  There was no denying his joy.  Chen Ping loved his hobby.

The 71-year old engineer spent many of his happiest moments tinkering with radios.  Before the internet, there was short wave radio; it was his doorway to the world.  A way through which he could “connect with more people.”  Chen spoke about it with passion, and warmth.  Of all the friends he’d made and how the radio enthusiast’s “honour code” had become his way of life.  They adhered to set rules and measurements, they respected each other… and above all, he stressed, they kept talking.  There was a shared joy in their explorations and their triumphs.

Chen’s hobby did not keep him cooped up within his four walls.  His most notorious adventure took him on a jaunt to Scarborough Shoal with a multinational group of other amateur radio enthusiasts.  Out in the South China Sea, the shoal is almost 3,000 kilometres from the Chinese mainland, and 198 kilometres off the coast of the Philippines.  Chen’s expedition is recognized as the first one to set up a radio transmitter there.  “We did it to get points in the radio amateur circle…,” he explains excitedly.  He recalls it with pride.  This initial adventure (he returned twice more) took place before things got heated between China’s government and the Philippines.  Both countries (and Taiwan) claim Scarborough Shoal as their own.

Like Chen, most people in China believe the shoal, and most of the South China Sea for that matter, belongs to them.  It’s a non-issue.  The sea, and everything in it, has always been China’s.  That’s what their history tells them.  It’s in their children’s schoolbooks.  And it’s been that way for generations.  Few here are even aware there’s a real fuss going on about ownership just beyond their coastline.  That neighbouring countries are indignant at China’s construction of what it claims to be ‘civilian installations’ in disputed waters to concretise its claim.  So indignant that the Philippines has brought the matter before an international tribunal for arbitration.  China is ignoring the arbitration, saying it’s a regional matter that can be dealt with directly with her neighbours.  But China’s neighbours see her maritime construction as aggression – and find it hard to trust China’s intentions.

Of those here that are aware, one woman said: “we can’t always let others bully us.  Our economy is strong now, we can do that.”  But there are also those that have said, in whispers: “those islands and reefs are so far from us – I don’t know why we insist on claiming them…”

Chen thinks his government should take a page out of the radio amateur’s book:

“It is not good to anxiously solve it immediately…because at this moment, the ideas of all sides are different.  The best thing is to keep talking… to find a common point and to see if we can’t utilize the common point to overcome the disagreement.”

And if no common point is found?  “Then wait a few years, maybe the next generation will have better ideas.”

For Chen, it’s all about connecting.  “I am optimistic,” he says candidly, “this is way of life.”